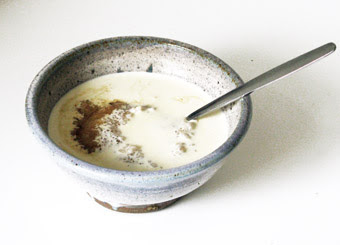 What I liked was the particular range of colours.  The reduction was really good, in other words there were more than the usual scattering of speckles in the colour, the background colour itself is a soft, well, oatmeal colour, but with slight tinges of light blue where it had caught some extra heat.  Yum.  And so was the porridge.
Posted by Cloth and Clay at 9:00 AM
Labels: food, pots