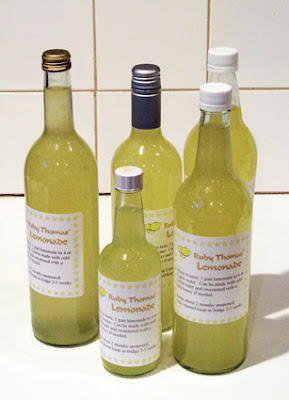 It's been a while since I wrote a foodie post for this blog, so it's overdue.

I like to make jams, pickles etc as Christmas presents but for one reason or another it wasn't a jam-making sort of year so I was looking for some substitutes.  I made a rather tasty grapefruit marmelade (not nearly enough left for us so I may have to make some more.  I also decided to make a batch of Ruby Thomas' Lemonade.  I used to make this often but had completely lost my copy of the recipe.  I had to seek help from The Oracle (also known as my mother) and fortunately she still had the original.

Ruby Thomas was a friend of my maternal grandmother's when she was out in India.  My grandfather (well, both of them, actually) was in the army and they came back to the UK on leave for a few months only to be prevented from returning by the outbreak of war, so this recipe dates back to the 1930s.  Now, we think of lemonade as a fizzy drink but this is in the old tradition of home-made lemonade that you see people in old movies drinking in hot weather (or indeed permanently hot places like the southern states of America), so it's more of a cordial.  I've found it very good made with hot water if you want a winter pick-me-up.  I daresay you could put honey in it or something stronger if you wanted it for a cold remedy.

As I said, I haven't made this for many years; I think I stopped because it's made from sugar.  I haven't ever changed my eating habits much but I do drink sugar-free when I can.  I wasn't sure I could even get the ingredients any more but the Epsom Salts were available from Boots and the acids from our local wine-making shop.  A word of warning - when I read the Epsom Salts tub I found that they should not be consumed by pregnant women.  It says breastfeeding women too but we checked with the maternity hospital who said there was no problem after the birth. 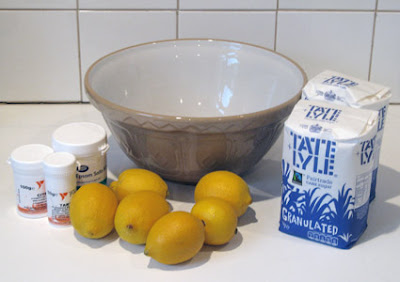 
A large mixing bowl.  If you are fortunate like I am, your mother will have offered you one of her two Mason Cash bowls when she downsized.  If not, improvise.  Use more than one bowl if necessary. 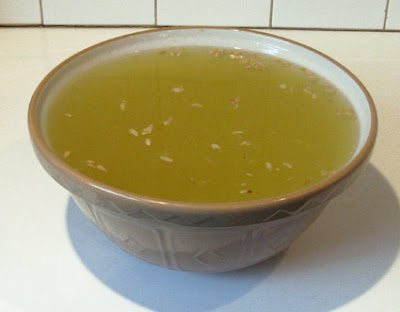 METHOD:
In a large mixing bowl, mix sugar, grated lemon rinds, acids and salts.
Add the juice of the lemons and stir.
Pour in 4-5 pints boiling water, depending on how much you can fit in your mixing bowl!

Stir and leave to cool.  Strain if necessary then pour into bottles, preferably sterilised as you would sterilise jars for jam.
Should make about 5 large bottles.  The lemonade will keep a month or two in the bottles but once opened, keep in the fridge where it should keep for a couple of weeks.
To use, dilute with water to taste, probably 1 part lemonade to 4 or 5 parts water.
Posted by Cloth and Clay at 5:00 PM
Labels: food, recipes