J is for Juggler 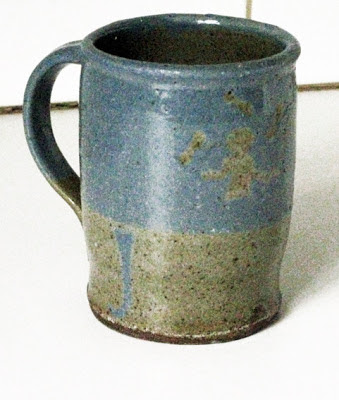 Well, I did say you had to look carefully.  I made this mug many, many years ago, at a guess probably about thirty years ago.  At the time I was attending pottery summer schools each year at Ridge Pottery.  I spent my weeks there each summer trying out different decorating styles as my skills increased.  This one uses slip.  The juggler and clubs are made by wetting newspaper cutouts of the shapes, attaching them to the pot before dipping in blue slip  The newspaper peels off when the slip dries out.  The letter is painted on through a newspaper stencil.

I might have got into more slip decoration eventually but the particular clay, glazes and firing method I use don't respond well to dipping in slip, so this was one idea which fell by the wayside.  I have a feeling that that particular year I made three or four others of these for friends as presents.  But it's a long, long time ago.

In the mean time, though, J is for juggler in the sort of working life I've built up.  I like all the different components and mostly do manage the juggling well.  Today, though, is one of those rare days when the clubs all fall to the ground.

What with making the Hen Portraits, putting on Another Beastly Art Exhibition and a week of tidying loose ended jobs along with fitting in a number of teaching sessions, I haven't been in the pottery for several weeks.  The situation is becoming more pressing as pots are needed that will take a few weeks to produce.  So the week ahead was well planned.  Two teaching slots on Monday, Tuesday and Wednesday in the pottery all day, Thursday cooking and arranging the house for a bring and share, Friday teaching first thing and handles on mugs made on Tuesday and on Saturday I'm going to be attending my first ever school reunion.

The clubs all fell to the ground when I found that the clay I thought was kept just right in an old fridge had gone hard.  New clay much too soft and will take a day sat out in a heated pottery.

Not enough raw materials for a spontaneous glaze mixing sessions.

Sewing machine booked in for servicing today so couldn't finish a couple of projects which would have been usefully tidied out of the way.

So, failed juggling.  I'm finding useful things to do, of course.  Putting together an order of glaze materials, for one!  Another couple of orders for silk-painting supplies.  Packaging up an order to go in the post.  It's not the same, though.  I really, really wanted to be making mugs today.

Posted by Cloth and Clay at 12:58 PM
Labels: pottery, work