O Stroud! Where is thy grit? 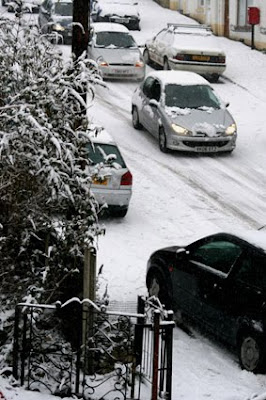 I'm sure for many reading this, this picture of a snowy road will look like nothing much.  It's notable, though, because I don't think I've ever seen the road outside our gate in this state.  In fairness to Gloucestershire County Council, I have to say that roads are usually gritted hereabouts. Snow was forecast for this evening here and perhaps that was what led to the problem.  I set out at 11.50 to pick up a friend to take her into Stroud.  It began to snow at about 11.55.  I made my way to my first destination where I was probably for about 10 minutes.  By the time I came out, the roads and pavements in Stroud were covering up with snow and very slippery underfoot so I made my way to Withey's Yard, fired up my mobile and summoned the cavalry.  M and Charlie arrived about 25 minutes later with my Yaktrax.  I was then able to negotiate through Stroud, back to the carpark.
We took J home and then headed for Stroud.  Lots of tail-lights ahead, so we tried a different route.  More tail-lights.  Luckily a helpful chap made his way through the snow to tell us that there was an accident on a junction ahead (accounting for both roads being blocked) and we were near enough to a junction to reverse and find an alternative route.  Having planned a bit of a stock-up, we headed for the supermarket, where the shelves were completely empty of all vegetables except a few potatoes, onions, parsnips and marrows.  Milk was just as low.  Apparently everyone had descended a couple of hours earlier.  We found most things on our list and headed home.
By now most roads were fairly well jammed.  This is one of the delights of Stroud: if one central road has any kind of hold-up, the whole town will grind to a halt within fifteen minutes.  We spotted a likely shortcut, avoiding the queues on the main road and made it home down a slightly snowy road by about 2.00.  Once in the driveway, I need my Yaktrax on again to get from the car to the house.
Just in time.  Barely fifteen minutes later and cars were having problems getting up and down the road.  At least two cars slid backwards into other cars.  Some have been abandoned, as you see here.  Since then cars have gone both up and down the road but often only by snaking from side to side and others have either turned round or abandoned their journey.
I've seen it said somewhere on the web that some people are happy that the UK doesn't spend money preparing for bad weather that would most likely not happen.  They feel it's a waste of resources that could be spent on things which definitely will happen.  I do not share this view.  We are lucky - we got our shopping and all got home without any mishaps and unless there is a power cut, can happily survive at home now for many days.  But many are not so lucky.  There will be people spending the night somewhere other than where they planned to tonight, that's for sure.  There will be others who were planning to shop later who may now not have the supplies they need.  There may be others still who are ill and need medical or other help which is not able to reach them.   I'd prefer that resources were set aside in preparation for bad weather.  If we don't need the grit, surely it will keep till we do?
As I type this (about 4.30) the sound of whining engines and spinning wheels makes its way periodically through the double-glazing.  I can't see things improving in a hurry.
Posted by Cloth and Clay at 4:39 PM
Labels: seasons, Stroud