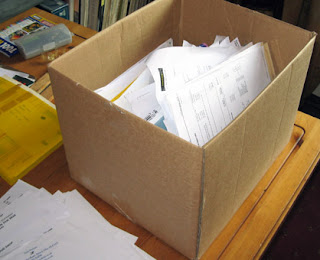 Tricky blighters, your pears.  I really love a pear that is just right but find it so, so difficult to buy pears so that that is what I get.  I know they're not going to be exactly ripe when I buy them, but how can you tell which ones are good at that stage?  And how do you know how long they'll take to ripen?  And even, how can you tell from the outside whether the pear is ripe?  Most pears I buy end up getting poached because they just aren't nice to eat raw.  They are either too hard or have gone woolly, and there's little nastier in the fruit world than a woolly pear.  I bought a bag of Conference pears last week.  There they sit, looking promising.  The first one I tried had the audacity to be too hard at one end and verging on the woolly at the other!

Then, there's their shape.  Pear-shaped.  Apparently the typical Englishwoman's figure, starting with narrow shoulders and bulging outwards towards the hips.  It's not supposed to be a Good Thing.  I'm not sure I am pear-shaped, though.  Overweight, certainly, but I think more of a Bramley apple than a pear.

And finally, things go pear-shaped.  This one I like.  I've used the expression many times to describe 2010 as a whole.  And at last I have an illustration to demonstrate it.  You see above, ladies and gentlemen (and my other friends who don't qualify for the aforementioned titles) a large cardboard box full of A4 papers that is filing waiting to be done.  I've just had to go through it to find all of a certain type of document and when I got to the bottom I found that in fact it contains papers for the last twelve months.  In other words, I haven't done any filing since last year started to go pear-shaped towards the end of March.

If you read yesterday's blog you will remember my claiming to be organised and good at admin.  I don't recant.  It's still true.  It's just that filing my own paperwork was one of the things that just went out the window last year.  Not literally, of course.  That would have been a disaster.  No, papers just piled up and piled up until they needed this massive box.

"But it's a quarter of the way through 2011!" I hear you cry.  Yes it is.  And yes, I do seem to be getting my life back on track.  However, this means that I am doing all the things I should normally be doing.  It doesn't mean I can miraculously catch up with all the things that didn't get done last year.

It takes quite a lot to surprise me, but actually I was surprised to discover twelve months' worth of paperwork in this box.  It's just not me.
Posted by Cloth and Clay at 8:44 AM
Labels: life, work