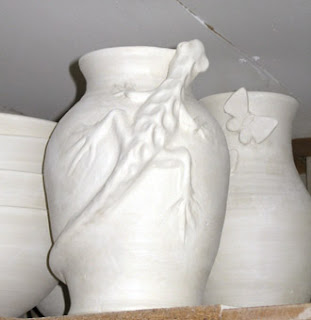 As promised, a progress report about the lizard vase.  You may be able to see here that it is now a fairly uniform white in colour.  That's the first way to tell that it is dry but you also have to feel the pot.  If it's in a reasonably warm room it should feel the same temperature as the room.  If it's still damp, it will feel slightly cooler.  Finally, if I'm not sure, I press the pot to my cheek as there is a better sensitivity to damp on the skin there.  In this case, though, I know the pot is dry and in any case it's now sitting waiting for the next stage.

So, the lizard has survived the drying out stage.  This is actually the least precarious.  They nearly always do survive drying out.  The next thing will be to decide on the colouring I'm going for.


This is not an easy choice.  I don't have many glazes and on this clay there are really three colour choices - a greyish white, such as you see on chicken pots, a creamy colour which is on the cream lustre pots and the colour I have called "heather" because it reminds me of the heather moors in Yorkshire in all its varieties.

What makes things more complicated is the choice of oxides, colouring glazes and lustres that will go on the lizard itself.  With experience, one quickly learns some good and bad combinations of these but there is plenty of unpredictability in these things and I have to allow for that in what I plan to do.  I think it depends how I'm feeling generally what level of risk I enjoy.  Sometimes I want to play safe with a combination that almost always works and sometimes I'm in the mood to just go for something a little unexpected.

The jury is still very much out about how to glaze and decorate the lizard vase.  I may be moving towards a decision but I'm certainly not going to announce it here until its done.

I may have mentioned before that for most pots I do only one firing.  This is known as "once-firing" (subtle, eh? ;) ) or "raw glazing" because the pots are raw when glazed.  To extend the cooking metaphor, the majority of UK potters probably don't do raw glazing and therefore their pots are cooked once before glazing.  This is known as "biscuit firing" and the resultant pots as "biscuit ware".  Completely unfired pots are "green ware."

So you take a bone dry pot and ruthlesslessly swill a whole lot of wet glaze around its insides before dunking it into more glaze and then placing it back up the right way on a board.  Glazes are made of powdered minerals suspended in water.  Raw glazes have a high proportion of clay in them to make them "fit" the pot and a consistency between single and double cream is what I go for.  Still plenty of water around, though, which will of course soak immediately into the bone dry clay.  If the thickness of the clay is uneven, the soaking of the liquid won't be even either and, particularly where the clay changes thickness, the pull of soaked clay against unsoaked clay can cause fractures.

Are you ahead of me?  Yes indeed, lizards and their tails do present sudden changes of thickness of clay on a pot.  And that, Best Beloved, is why so many lizard pots end up as casualties, either at the glazing stage or the firing stage, where there is a similar problem with water content and thicknesses.  And why I'm not going to tell you how I decide to glaze and decorate the lizard vase until I know it has at least survived the glazing stage.
Posted by Cloth and Clay at 1:07 PM
Labels: information, pottery