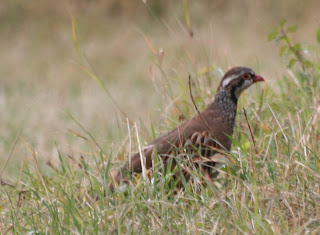 Sunday mornings are transformed once the season has started. Maybe the women still go to church, but the men seem to spend their Sunday mornings out shooting. We have three acres of rough grassland here, so in theory we can be on anyone's route on their shooting expedition so on Saturday Paulette in the café reminded us to keep an eye on how far Charlie went roaming on Sunday morning. Luckily he is not much of a roaming sort of a dog.

In the last few days we've had this partridge wandering round the yard. When we're inside he'll come quite close to the house but gets spooked if I get too close with the camera. Since we haven't seen him before, it sort of suggests he's taking refuge and doesn't know people would be allowed to shoot him here too. He's a fine-looking bird. It wouldn't stop me eating partridge if offered it, though.
Posted by Cloth and Clay at 12:04 PM
Labels: news, seasons, wildlife