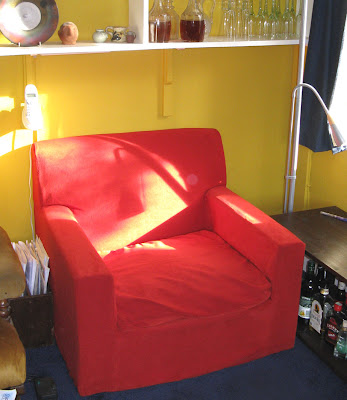 We seem to be in a mending phase. M has repaired the big dining table, which has been becoming more and more wobbly over recent months. I had this table made about 8 years ago. It's wider than usual for its length so one can get plenty of dishes in the middle (and two people can sit at the ends if necessary) and has two ends which pull out to extend the length considerably. Fourteen people sat round it comfortably when we got married in April. The overall table top makes the whole thing very heavy and the leg joints have suffered over the years. The maker had repaired one leg for me a while ago so M reglued all the other joints and copied the repair. It feels solid and reliable again.

In the washing machine at the moment is my big white embroidered tablecloth being rewashed in an attempt to get the red wax stains out from, er, last Christmas. I'd used my usual methods and it hadn't come clean and there wasn't time to tackle it in the spring before we went away. I've now used boiling water and gentle bleach and it is in a hot wash. I don't think all the red is coming out, but I will be leaving it at that.

Why the picture? Well, it's not quite mending, but it comes close. The last piece of sitting room regeneration is done. I have made a new loose cover for my armchair. We pulled the old one off in several pieces! It had gone through in many places and recently you could feel fabric ripping every time you sat down, which was a little disconcerting. I did have the whole thing covered with a throw so it didn't look as bad as it sounds. It took a long time to find the right red fabric; it had to be fairly similar to our new red sofa, but the end result is very pleasing.

And finally, I seem to be on the mend. I know rib injuries take weeks rather than days to mend but I do at last (almost a week later) feel that things are improving. I've had acupuncture, been to A&E (it got worse, and M was worried, though I knew there was no need) and am using every remedy recommended! I put the getting worse partly down to brushing the dog, partly to grinding the bases of some pots but perhaps mainly because rib injuries apparently often do get worse before they get better. Now, though, if I pace myself and take paracetemol I can do quite a lot.

Unfortunately, making pots is going to be the last thing I am able to do so there is a little worry around because I really need to be producing right now, but I am being reasonably philosophical and getting on with things I can do.
Posted by Cloth and Clay at 10:24 AM
Labels: news, work