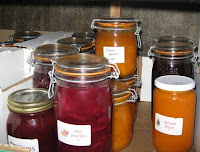 Part of the success of being a bon viveur on a budget lies in having plenty of storage space and freezers so I can take advantage of BOGOFs, bargain multi-packs and reduced-price-because-near-sell-by-date items. I have two freezers in the UK, one large, one medium. In France, though, I have only one very small freezer, which is turned off during the winter months. Still, after five months there this year it was pretty full. Three or four weeks before we left I set about eating everything up but couldn't quite do it. I thawed any fresh meat products and cooked them up, then brought back the cooked meat and froze it. The already cooked food was brought back as it was and we've been eating it up since. Yesterday we had chicken with preserved lemons for the third time in ten days. That was certainly not well organised.

As to over-stockpiling, I've decided that I don't.

In France it was a glut year for all fruit, as I've mentioned before, and I was determined to preserve as much of it as possible. I used to have one jam shelf, in the cupboard under the stairs. A couple of years ago M built me the broad shelf under the sloping lobby roof and that took the excess that I was building up. This year both are full and I now have bottled fruit and jam in boxes in a shed as well. The bottled fruit will become all sorts of puddings and we'll have lighter savoury courses on pudding days.

It was an interesting experience, though, eating meals based completely on what I already had. I like to batch-cook anyway so there are always meals which only need the minimum of work and it has been useful not having to cook much from scratch during the period of packing up and now unpacking. One of the strange things on our return here was looking in the freezers to see what I had. There's not much room in either, so I've decided to do a bit of eating up for the next few weeks. This will also save some immediate expenditure during the next couple of months, which are always lean ones for sales.

Working my way through the fresh produce we brought back with us, today I started thinking about the quinces. They're not over-ripe and it isn't urgent but I wanted to start planning the different things I'm going to make with them and I completely lost my recipe for quinces in vanilla quince syrup. Searched my recipe folder twice to no avail. I gave up looking and decided to do a google search for quinces in vanilla syrup. The fourth hit was my own recipe in the Umra Recipe Book, which I host on my own website! You really can find anything on the internet. (Do you think I can use the internet to find M's measuring tape?)

Mind you, I haven't found a recipe for quince pickle, which H told me on the phone yesterday is utterly delicious. If anyone out there has such a recipe, I'd be pleased to have it.
Posted by Cloth and Clay at 3:31 PM
Labels: news, recipes