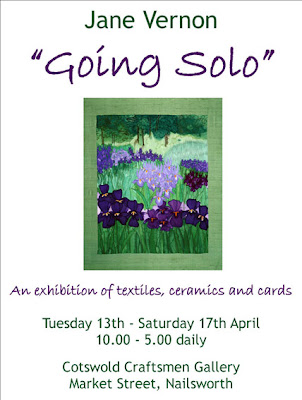 Er, well, that's it really.  I'm sad I haven't had time to even write a few lines lately, but some time may come up soon, I hope.  What am I busy with?

Posted by Cloth and Clay at 9:41 AM No comments:
Labels: exhibition, pots, work 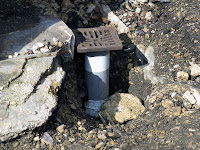 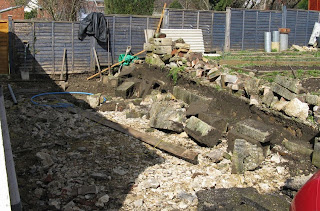 Posted by Cloth and Clay at 1:12 PM No comments:
Labels: greenhouse 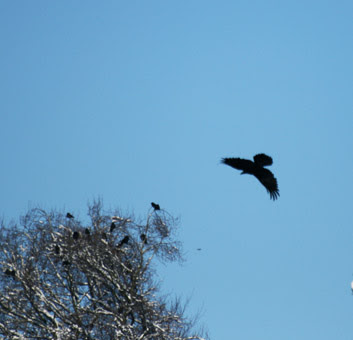 Things were getting rather stale round here.  The last couple of months had brought the lowest sales figures for a long time, partly because I had to turn down at least one opportunity because I was still not back making pots and other outlets had fizzled out for one reason or another.  Eventually I fired the kiln the other day, only to have one of the most disappointing firings for a long time.  This kiln has been uneven since I had it and there are things I can and do do to counteract that but sometimes it still surprises and therefore greatly disappoints me with how uneven it can be.  There are still more things to try, which always makes me hopeful.  But a downturn in selling opportunities and sales income together with a downer of a kiln firing didn't make me happy!

There have been things in melting pots, though.  One of the melting pots - probably the biggest! - is my own mind.  I may have looked idle in the pottery department but I have not been idle in the business planning department.  At first sight, the recently offered opportunity to have a gallery all to myself in April looked impractical, especially as there are other things in the pipeline and bearing in mind that I have three missed months of production to catch up on.  Yesterday, though, I made a decision.  Commit myself to working on sales and being away from my workshop for April in order to get the sales figures lifted.  There are opportunities coming up in the autumn, so it's now that I particularly need to give things a lift.

So.  My first solo exhibition will be from 13th - 17th April at the Cotswold Craftsmen Gallery, Nailsworth!

I'm extremely excited about this.
Posted by Cloth and Clay at 8:43 AM No comments:
Labels: exhibition, news, work

But is it Art?

When I turned up at Bath College of Higher Education in 1973 it wasn't even called that. I'm not sure it wasn't called Bath College of Domestic Science. It had an annual intake of about 100 domestic science students and 30 textiles students, ostensibly all training to be teachers of those subjects. I don't know what they thought of me. At my interview they asked me what I would do if they didn't give me a place. I replied that I would probably become a secretary. Possibly they were shocked into submission by this answer. I was 19 but if you met me you'd probably have placed me little older than 16. I look back now at that self and naturally parts of my present self were there and had been forming since birth but so much of my artist self (and, to be honest, my adult self) was completely unformed.

In 1973 "Crafts" magazine was launched, but I didn't know about it until 1974. I think it was the textile construction lecturer who first drew it to our attention and I bought one or two copies from 1973 and 1974. In 1975 I started buying every issue and have never stopped.  Within the pages of "Crafts" I discovered my artist self as awareness, inspiration and ideas flourished in response to the work I saw there. Many artists and craftspeople I have known over the years have criticised the magazine as being elitist, out of touch and having lost its way and indeed sometimes I've wondered about cancelling my subscription because the world shown in "Crafts" seems so far from my own experience.

Today, though, I started reading through the March/April 2010 issue.  Halfway through the magazine I realised that already there were two articles which really speak to me.  The first is an article about  Edmund de Waal.  The piece shown in this link is one that I love but the others in the article (you'll have to buy the magazine to see them) are even better.  The other item which really caught me was Moon by Tracey Heneberger.  Again, this is a small picture and you'd probably have to buy Crafts Magazine to get the best effect of the piece, but turn the magnification up on your screen and you may be able to see that it is constructed from anchovies, with epoxy, shellac and resin.

I love this piece. No, of course I wouldn't want it in my house, but that's because my house is a 1930 brick-built three-bedroomed affair. I'd love to see it in any waiting room where I have to spend time, though, or any public foyer I have to pass through. The same goes for Edmund de Waal's installations. I don't even aspire to making ceramic work like this. Well, not much. OK maybe a little. OK, I do have a sort of idea I've been playing with for a couple of years for some decorative pieces, not installations, but purely decorative ceramics. I also have ideas for several different styles of functional bowls and glaze colours I'd like to develop too, though. It's good to have the ideas, but they certainly won't all come to fruition.

But is it Art? Or even Craft? I don't propose to embark on the art or craft discussion here, not this time anyway. I will say one thing, though. If someone has made something that I like to look at and would like to look at again and again, I reckon it must be something to do with art.

These two items have made me very happy this morning. Not just because I like them but because they touch something in me that I realise has only recently been allowed to re-emerge after a couple of years of being squeezed almost out of existence by sheer production of work, that only my 'getting a life' has allowed to return. I'd be hard pushed to name it. It has connections to creativity and inspiration but they haven't been absent. Open-ness is the nearest I can come to an explanation at the moment. Open-ness to thoughts and ideas and feelings just for their own sake, not because they must have a place in my current work or projects but just because. Because they feed the creative self.

It's a great feeling.
Posted by Cloth and Clay at 10:57 AM No comments:
Labels: thinks, work 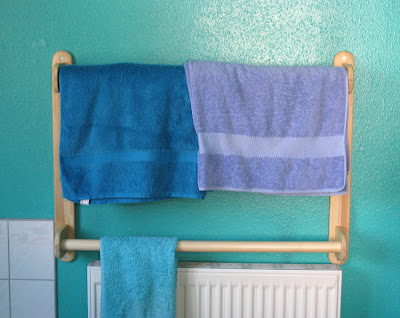 Actually, it's not badly made. I did all the cutting and shaping and M did all the joining and putting up. I was still getting back into the hang of using my jigsaw so there are certainly uneven bits in some of the curves though you can't see those from this picture. And the point of making this towel rail was indeed that it is large. We found that you just can't buy large towel rails. What do people hang their bath towels on? Old ones, I suppose. Or maybe they all buy those radiator-types. But for our bathroom we just wanted a straightforward wooden towel rail, and here it is.
Posted by Cloth and Clay at 8:48 AM No comments:
Labels: news

Well, not me, obviously! But take a look at Chicken Pots. This new site is just for online sales of, well, chicken pots! The limit of five products on the free webs.com sites makes them just right for focusing on one design of pottery. I must say I'm particularly pleased with how the site has turned out.

I've only really got plenty of stock in this one design, but have ideas for more mini-sites in due course.
Posted by Cloth and Clay at 2:12 PM No comments:
Labels: news, pottery, work

If seasons are colours ... 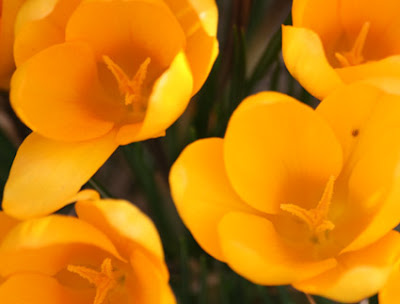 ... then Spring is yellow.
Posted by Cloth and Clay at 8:08 AM No comments:
Labels: photography, seasons
Newer Posts Older Posts Home
Subscribe to: Posts (Atom)