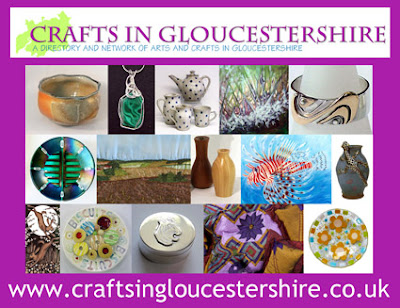 A long time ago I promised to write about the new venture I'd been busy creating and the image above (which is now reproduced as postcards amongst other things) explains all.

Well, perhaps not all.

When Gloucestershire Arts and Crafts Centre moved from its first location to a new shop, I decided not to move with it.  This was a business decision: Gloucester isn't and never has been a place where people buy a lot of domestic pottery.  When there was a Made In Gloucestershire shop in Westgate St. potters who were used to selling elsewhere in Gloucestershire found that their sales were much less frequent in Gloucester.  For me Made In Gloucestershire worked quite well because I sold a lot of greetings cards there.  At Gloucestershire Arts and Crafts Centre this didn't happen because we had a large number of very good card makers.  One in particular, whose beautiful cards I would have bought all the time if I didn't make my own, sold cards daily and the remainder of  greetings card sales were shared out between the rest of us.  Pot sales happened, but not frequently enough and the sales I made were uneconomic when set against the time spent working in the shop and other conditions of membership.  So I said goodbye.

In spite of this being a good business decision and a good life decision to be able to spend more time on making work, I was very sad about leaving GACC.  I really enjoyed being part of a large group of like-minded souls and I particularly enjoyed creating and maintaining the website.  The new shop is much smaller and I wasn't alone in deciding not to continue so that meant a large number of us no longer in the network. 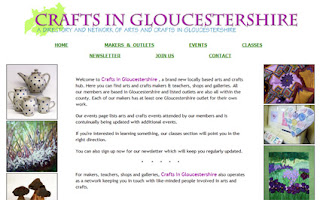 So Crafts In Gloucestershire was born.  I had the idea way back in the summer and started setting it up at the beginning of September.  The website has been live for about a month and I've sent out two newsletters.  Membership is growing slowly; a large part of this is that arty types are notorious for not getting round to admin work and although I write the web pages, makers need to write their own text and sort out which pictures they'd like to use and this is another task falling just when most of us are busy making extra stock to have plenty for Christmas sales.  So, it will grow slowly but, I think, surely.


Crafts In Gloucestershire is an online directory.  It lists makers, teachers and events which fall into the arts and crafts category.  It's also a network, which means that event organisers can send us notice of craft fairs and the like, which will be passed on to all the members.  Members can contact each other, perhaps to suggest a group exhibition, or to ask for support and ideas.  I hope when there are enough of us we might have the odd social get-together. 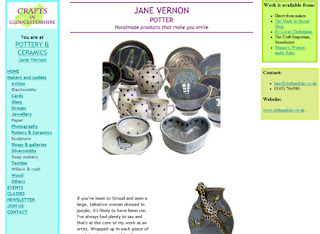 As well as a page with pictures and info, makers also may have their products or events included in an occasional newsletter or mentioned on Twitter or Facebook.

I'm really rather pleased with the whole project.  I've really enjoyed designing the logos, website and publicity documents and I think I've created something which is really good value for the members.

Well, it wasn't supposed to be a sales pitch, though I suppose it might have turned out that way.  I wanted to write about it, though, because I do see it as part of my work and as such it had been occupying my mind for a while.  Setting up the website was quite time-consuming but now it's done, adding entries is not.  So far I've enjoyed planning and creating the newsletters and I must admit to being a bit of a Twitter and Facebook fan so posting there is no hardship either.

You'll have noticed the web address above, but here's a link to make it easy:

and while you're at it, would you like to receive the newsletter?  Just email email craftsinglos@gmail.com and ask for a newsletter and it will soon be winging its way to your inbox.
Posted by Cloth and Clay at 12:16 PM 1 comment:
Labels: website, work 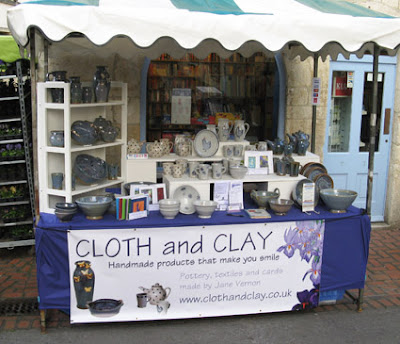 Actually, I'd better get a move on.  I need this all ready for 29th October.
Posted by Cloth and Clay at 5:35 PM No comments:
Labels: work
Newer Posts Older Posts Home
Subscribe to: Posts (Atom)