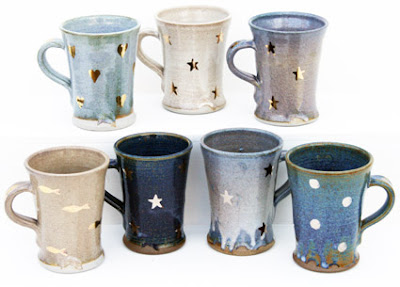 Being creative is so much more than making concrete objects or being able to draw, as I'm sure most people would agree.  I sometimes feel, however, that this idea is offered as a sort of sop to those who sound ashamed of not being able to make things.  "Oh, but you're creative in other ways!" isn't really all that encouraging to people who are probably just expressing envy of those who can paint pictures or, yes, make pots.  It doesn't stop them wishing they could paint too.   I'd rather explore with people what is much more likely, which is that someone told them once they were no good at art.  It takes a few seconds to say this to a child or young person but a lifetime to recover from and it makes me very sad.  I try to encourage people by explaining how I failed my "O" level in art, and not just by one grade but quite convincingly, but I can see that often they just don't believe me.

When I was Artist in Residence at Nature in Art a couple of weeks ago, the door opened one day and a woman entered saying even before she got through the door, "I'm sorry, I don't know anything about art at all.  I've been trying to think of an intelligent question to ask."  Her friend, it seemed, knew more, and in fact paints a little and we were all three able to get into a relaxed conversation in the end.  But I felt very sorry that someone had come through the education system believing not only that they couldn't 'do art' but that they had to apologise for wanting to look at it without being able to demonstrate some knowledge.

I've written here a month or two back about how much I'm enjoying writing websites and how, for me, the work is just as creative as making a wallhanging or a pot. I'm still pretty proud of the websites I've designed and written from scratch but am also enjoying making one to order where there is less of a design element and more of a making to commission feel about it.  I'll provide a link once it's finished.  This week, though, I've been aware of another aspect to my creativity which is certainly something common to many more people than those who can paint or make things - the idea of being creative with a situation.  If you're given nothing but lemons, make lemonade.

The first lemon has been kilnloads of pots which haven't turned out the colours I was expecting.  This has happened because learning to work with a gas kiln is a little like learning to live with an animal - not so much a question of taming a beast but of learning its natural habits and accepting a degree of unpredictability.  After 100 firings I eventually found how to get the temperature to distribute more evenly throughout the kiln.  This was a great discovery and huge progress rather than a final destination.  The next stage is to find out exactly what to do to achieve the different temperatures that result in different colours in the glazes. The first firing at a lower temperature proved not to be all that much lower.  One expects the first guess at an experiment not to succeed but I was left with lots of pots which weren't the colour I had hoped.  Next time I'll use the information gained and have another guess.

The other lemon has been the situation which has made me stressed and gloomy - finding out that I have fallen so far behind with my production that whole chunks of ranges I normally keep stocked have disappeared and no real hope of catching up to where I was.

The photo at the top shows seven mugs, all rather different in colour.  They are produced with two glazes and two clays only.  Some of the colours are understandable by me, one, at least, is very surprising and so far unexplained.   When my analytical brain eventually switched off trying to work this out, my creative brain took over and I suddenly realised the way forward.  Let go of having to produce everthing within 'ranges'.  Make more of the individuality of pots!  How simple.  I expect some of you out there are wondering what took me so long.  Maybe that's a question for another time.

I really like all these colours coming out of the firings lately.  Some are old and some are new but they've all got their attractions and I'm pretty sure that those who buy my pots will feel the same.  So instead of thinking I've still not got replacements for the things that have run out, I'm thinking I have lovely new replacements!  If anyone wants things to match existing ranges, I can do them, but just not straight away.  J asked me if the iris mugs were to be a new range and the answer is yes, I think I'll make some more of them, and perhaps some other items if the mood takes me, but no, they're not going to be a range as such.  No more pressure of keeping enough of everything in stock.  Time to celebrate the pots I've got instead of bemoaning the ones I haven't.

It's an idea I've been pondering on for a few months, in fact, without the ideas reallly forming into a plan.  Next time I'll show you a couple of new teapots.  In the mean time, creativity in another form.  How do you get good lighting and dry conditions for taking studio shots of pots in the winter?  In your underused shiny new greenhouse, of course! 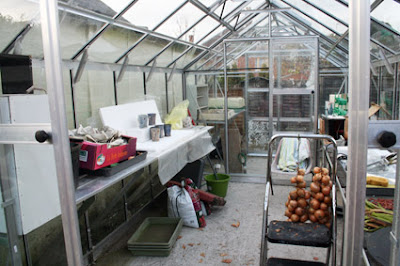 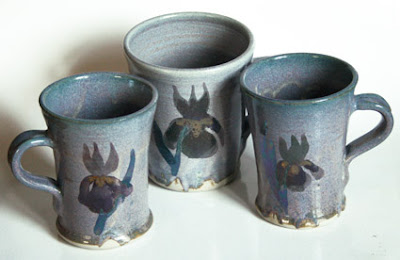 What you need to know is that dark green lustre and light green lustre don't work for everyone and I am one of the people they don't work for.  So I now use them in ways appropriate to the colour they usually turn out.  Usually is about 95% of the time, at least.  On this occasion, they decided to be halfway between the colour they usually do and the greens they are meant to be, resulting in a sort of greyish colour.  I don't mind the effect, actually.  I was reasonably happy with the results, until I asked M what he thought, and was rather taken aback to find that he didn't even know what they were supposed to be and didn't sound convinced when I told him.

Feedback from others gratefully received!
Posted by Cloth and Clay at 10:04 AM 3 comments:
Labels: pots 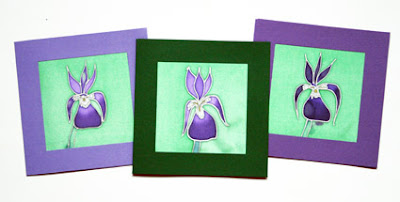 Last week I was Artist in Residence at Nature In Art, a lovely museum and art gallery dedicated entirely to, well, nature in art.  I've been a couple of times before, in the spring but this was the first time I'd been at this time of year and filled in at the fairly last minute for someone else who had dropped out.

It's a lovely place to be and work but I have to admit that this time towards the end of the week I was feeling rather cold by mid-afternoon.  The studio is in effect a conservatory onto a brick wall.  Lovely light, plenty of space.  But chilly, in spite of a new heater.

I spent most of the week catchin up with making silk-painted cards, a job which in fact I have been finishing off this week.  The photo shows my latest additions.  I don't think I've become obsessed with irises, but I do love them and so do many other people.  The iris canvasses are much admired and I always sell a lot of cards of iris wallhangings, so I decided to do a few silk-painted cards as well.  Normally the silk-painted cards are cartoon-like but this time I went for a slightly more realistic look.  And I rather like them.  I hope you do too.  Especially if you're a customer.
Posted by Cloth and Clay at 1:09 PM No comments:
Labels: cards, textiles, work

Posted by Cloth and Clay at 8:50 AM No comments:
Labels: artwork
Newer Posts Older Posts Home
Subscribe to: Posts (Atom)