Many people (be glad I didn't write 'alot of') of my age or thereabouts are busy complaining about others beginning a sentence with "So",  as in the answer to the question of how I've spent my day so far being "So this morning I have already packed up the boxes for tomorrow's market" when the sentence doesn't follow from anything.  It's one of those grammatical developments that are causing the most angst with people currently.

There are others which bother me quite a bit; I'm still definitely a less and fewer pedant and would like to be a 'beg the question' pedant were it not for the fact that I suspect half of those reading this blog won't even know what I mean.  It's literally (yes, precisely that) years since I heard the correct use of the phrase and since I've heard it misused even in philosophic circles where it should have a valuable function and indeed had to explain to Mike what it used to mean (and he was a great thinker, philosopher and wordsmith but didn't know) I will probably give up with that one.  I'm sad about it though.  The phrase 'to beg the question' is a nice (in the proper, original use of that word too!) way to express the concept that it does.  If you don't know it and would like to, I recommend Wikipedia.

But you'll have noticed that I do break many other grammatical rules, such as beginning a sentence with a preposition.  Indeed, I'm fond of writing incomplete sentences.  When it seems appropriate.

You've probably guessed where this is leading.  I have realised that these days I frequently start sentences, paragraphs, stories and the like with 'So'.  I make no apologies.  It makes a change from 'Well' and I find it really hard to just launch into speaking without at least a minor preamble.  If you hate it, you probably hate sentences starting with 'Well' also, but ask yourself which is worse?

If you hate both equally, then possibly you find this post upsetting and I am sorry for that.  I won't be stopping, though I hope to continue to resist "from the get go".

One of the by-products of working as a full-time artist and being single-minded about it is that I have spent a lot of time saying no.  In order to try to maintain the stock levels I would like, I put my work first much of the time so if something was suggested that would interrupt my normal working routine I thought carefully about it but would often say no.  Some people apparently find the discipline of working for yourself from home difficult.  I seem to have found that part easy.  If you work in an office five days a week nobody expects you to be free in the day on weekdays and I have always treated my working week (albeit often longer than five days per week) much the same.

Now I am working part time, one of the main benefits is that I'm able to say yes much more often.  Happily, opportunities have also come along to give me the chance to exercise this freedom.

Last week I spent a couple of days teaching a friend to throw a pot.  I say a couple of days.  We actually had a session on the first afternoon, a short session on the second morning and a third that afternoon.  Vivien has set herself a challenge to complete 60 tasks during the year she is 60, to raise money for her two favourite charities.  Some of these tasks are relatively short, like spending two days learning enough to throw a pot, but some are longer, like learning to play the saxophone well enough to play a particular riff from a favourite song.  Some of the tasks are definitely challenges in themselves; throwing a pot in a short time when you have no previous experience of clay work is one such.

Vivien and I met more than 40 years ago at Eastbourne School of Domestic Economy, where we studied Needlework, Dressmaking, Cookery, Laundry and Housework, (with a side order of Household Accounts plus Typing if you thought you still weren't doing enough).  I know her to be someone well able (if a little out of practice) to use her hands to make things so I was happy to offer making a pot as one of her tasks.

I began to worry when Vivien told me she herself was a tad apprehensive.  But hey, it was unknown territory, who wouldn't be?  I brushed aside my own worried thoughts about whether teaching someone I knew so well over so many years might be as difficult as teaching your partner to drive.  We enjoyed a leisurely lunch together and then went out into the pottery.  It was then she reminded me she's a bit of a perfectionist, confessed she is not as co-ordinated as I thought and dropped the bombshell that she can't copy other people's actions.  Seriously?  How do you teach something practical to someone who can't copy your actions?

"Don't worry," I said, "Over many years of seeing other beginners on courses I attended, I have never seen any beginner as bad as I was."

The first piece of clay produced a pot, though I had interevened on two or three occasions to 'rescue' it so it was not quite all her own work: 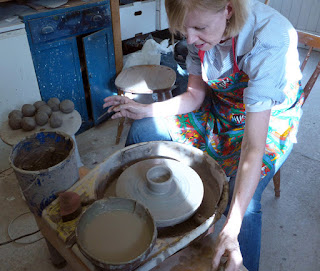 The next few, when Vivien was completely on her own, not so good.  But soon it was time for supper and a long, long time talking together, such that we haven't had the luxury of for many years.

The following morning I started by making a pot myself while Vivien had hands on from time to time to find out what it should really feel like.  Some more time on her own ...  well, read her blog to find out how that went.  Suffice to say that by lunchtime I began to think that here was the beginner who would make a worse go of things than I had.

We still had the first pot on the board together with a couple of other vaguely pot-shaped items.  So a pot had been thrown.  The task had been done.  Although ....  So finally to the afternoon session of day 2, and this time I didn't touch a piece of clay at all.  Instead, I watched and commented (and took photos) as Vivien worked.  And then ... drumroll please ... all of a sudden there was a pot. 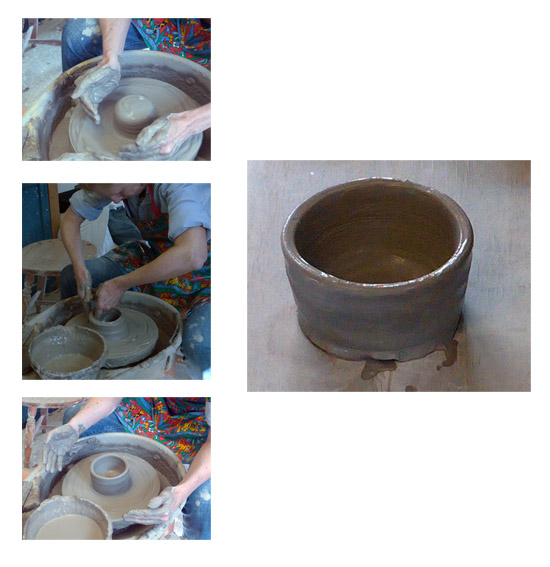 After which, three more pots of a similar size appeared on the board.  So, I still hold the record for the worst ever beginner at throwing.  Not only that, Vivien has completed her task, our friendship is entirely undamaged and I had the best time.  I'm so glad I said yes.


If you would like to donate to a good cause, please do make a contribution to Alzheimer's Research by visiting Vivien's JustGiving page.  It doesn't have to be a large donation but would be really appreciated.  Just say 'yes'.