Somewhat weirdly, I am on LinkedIn both as myself and as Crafts In Gloucestershire, where myself is a contact, if you see what I mean.  So Crafts In Gloucestershire gets the notifications that Jane Vernon's other contacts get, which is actually quite a useful tool because otherwise I really wouldn't know what's being sent.  LinkedIn remains rather a mystery to me, I'm afraid.  Anyway, this week Crafts In Gloucestershire received an email suggesting it should congratulate Jane Vernon on her 30 year work anniversary at Cloth and Clay.  Well, I hadn't realised.  But it's true.  May 1984 was when I started up in business as an artist. 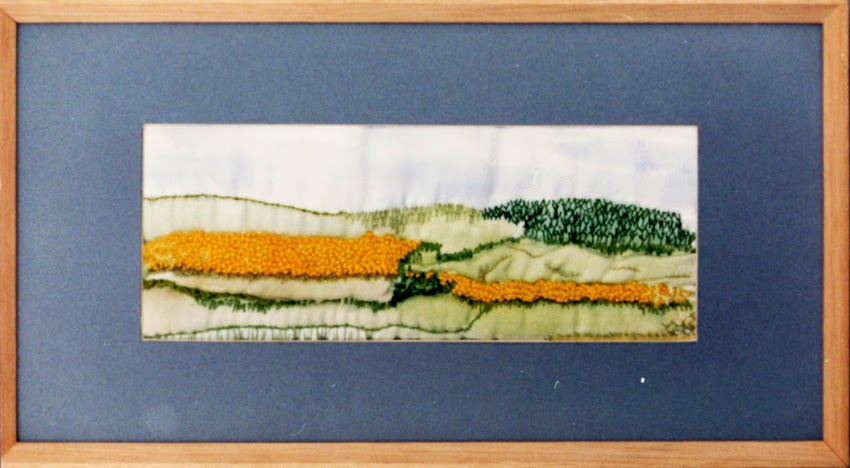 And this was the picture that did it.  I had been making embroidered pictures for a few months, but this one made me realise that it was something I could do professionally.  Looking at it now, I'm not sure it looks all that much but at the time it seemed to and certainly everyone else thought so too.

I was still teaching full time at this point but managed to produce enough pictures to start selling at Cirencester Arts and Crafts market later in the year.  I painted on silk with artists' watercolours, then embroidered by hand, using wadding to pad out the work.  The pictures were mounted and framed but never put behind glass.  They were of landscapes and plants.  Some were realistic, like this one, others more abstract and worked in different colour schemes.

Over the years my textiles work developed and I moved through embroidered mirror frames to wallhangings and now embroidered canvasses.  Silk paints came in and I took to those like a duck, as they say.  I've used machine embroidery, hand embroidery, mirror work, applique, synthetic fabrics, metallic threads, beads, sequins and more. Who knows what's next?

Although I had my own wheel and kiln when I started the business, I was making very little pottery and still finding my way through experimenting with clays and glazes.  I sold a few pieces to friends now and then but it wasn't until 1992 that I finally found the clay, glazes and techniques that form the core of my work as a potter even now.  Back then I still had a lot of unresolved back problems and could only work at pottery a few hours a week.  I can't even remember when I started having kinesiology treatment and eventually acupuncture, but between them they turned my life around and most of the time I am now able to work full time in the pottery if I want.

Thirty years was half my life ago.  Back then I was psychologically a very late developer, a bit scared of life generally and hadn't much self-esteem.  I can still remember how I felt when I made the picture above.  That amazing realisation that I had made something I knew someone would buy and that I had it in me to go on doing that.  Starting "in business", making, selling, registering with the tax office, meeting customers but above all making, making and more making, was the beginning of becoming myself.

The first decade saw me married, widowed, giving up full-time teaching,  and training in counselling.  The second decade saw me developing my artwork, my teaching skills and wonderful friendships.  The third has seen me in a new relationship and marriage, giving up teaching completely and becoming a full-time, self-supporting artist.

It's a pretty good place to be.  I'm not sure what's in store this next decade.  I want a little more life and less work in the work-life balance but new ideas are still tumbling around in my head and I still love making the things I make now, so we'll see.  But thirty years, eh?  Who'd 'a thought?


Posted by Cloth and Clay at 8:30 AM
Labels: artist, artwork, life, work