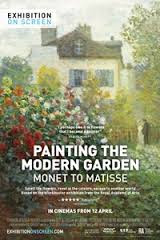 Painting the modern garden was one of those 'live screenings' of an exhibition, which was also so much more.  As well as glorious impressionist paintings of swathes of garden colours, we saw film and photographs of gardens of the time and now, all accompanied by a commentary which included letters and other writings by the artists.  About to embark on my big garden project, I felt enveloped in essence of garden.  I didn't want a plan and didn't get one.  Instead, the images and ideas gave words to the feelings I had about my own garden and what I wanted from it.

One of the most interesting things I learned was that whereas French garden designers might have gone for a more natural look, concentrating on colour schemes and sweeping vistas, German designers often considered areas of a garden almost as different 'rooms';  I realised that recently I had begun to see my own garden, in particular the patio, that way.

At one end I have the seat and 'coffee table' I've written about here before.  It's great for morning coffee, lunch and afternoon tea.  I moved the old battered seat out of the way but found last summer that I really enjoyed its being nestled under the escallonia, suggesting a little shaded seating area.  The problem was that the old battered seat was no longer safe to sit on.  I've looked for a new seat but nothing appealed as much as the old one, so I've now had it repaired and it's nestling beautifully. 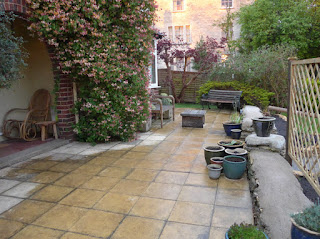 The other end of the patio can accommodate a dining table and chairs, or perhaps in the future a hot tub.  It also has the water feature and on warm evenings last year I enjoyed sitting there on the rocker with a book and a G & T. 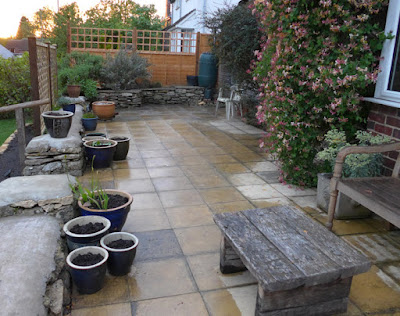 Then there's the vegetable garden.  Just before the landscapers started work on the front garden I finally got round to having a fence built along the top of the platform and the edge of the vegetable plot.  It was the final stage of getting the yard levelled and surfaced a few years ago that we'd left because it wasn't an essential part of the work.  I always wanted a fence there, though, having removed the big gates and some of the wall which divided the property off.  I like a boundary. 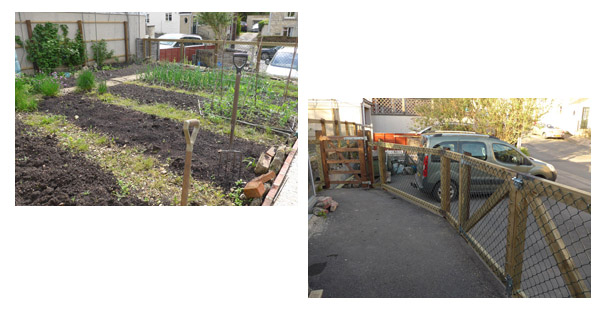 What I hadn't anticipated was that the vegetable garden now has a very different feel to it - another contained space, which it had never felt before.  And the platform that runs in front of the pottery and the greenhouse is now a safe-feeling area where plants might be hardened off, pots can be dried and generally one can feel one is 'in' the back garden rather than just slightly removed from the road.

All of which brings me back to my title.  My garden, my plot, is now transformed into a different place.  It's once more a place I want to be in as often as I can (weather permitting) and I'm really excited about how it might develop from here.

And so, of course, I am myself in a different place too. Planted, rooted and growing here and looking forward almost most of all to inviting other people in to share.