Days of lockdown Part 3 - my position 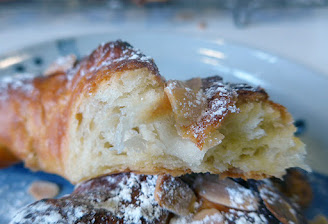 My position, like most people's, is probably unique to me.  Others have similar views but we are in different situations.  This is mine.
Before lockdown began, I could see it coming.  I stopped using public transport at the beginning of March and didn't go anywhere I wasn't prepared to stay shortly after that.  I visited my parents for what I expected to be the last time for months.  After I'd had time to do all of that, eventually we were in lockdown and my 100 days began.
I wore a mask whenever I went out, which to begin with was fortnightly to shop for food for me, and for a couple of months for a friend who was shielding.  A friend who mows my lawn would have a cup of tea on the patio and we used wipes for things we were both handling.
People were talking of lockdown being for a few weeks, or returning to normal, or variations on those but I was never expecting that.  The history of pandemics, I was told by my historian friend, is that they usually have a second wave which is worse than the first.  Then there's our government and the decisions it makes.  Nothing our government was doing was encouraging me to think otherwise - everything was decided at least too late and sometimes insufficient measures were introduced.  To say nothing of the confusion ...
Gradually lockdown was "eased".  People started doing things they hadn't done for months.  I haven't been to a pub or restaurant and don't intend to for the time being.  I'm still wearing a mask when out and in shops and now - quelle surprise! - we're being told we have to.  For a long time, shopping was the most risky thing I could do and now people are waking up to that.
I haven't hugged anyone, not even my friend who had her cat put to sleep.  I have once had coffee outside a cafe with a friend and once in a garden and I've had one set of friends and one family visit on my patio, with food and drink, which we all accessed separately.  Before that I was becoming depressed about how almost every person I know was managing to do something in the way of a holiday with family or friends and I didn't seem to have anything ahead to look forward to.  Yes, I could go away on my own to a safe location, but the point isn't the going away, it's the 'with people'.
I am now self-isolating for two weeks prior to going to visit my elderly parents for a week.  I will enjoy that as it's always good to see them and as they have a live-in carer, I get to talk to three people whenever I want.  I phone them every day but I know my occasional visits are an emotional lifeline for them.  When I'm there I do hug them.  After 14 days of seeing nobody and feeling exactly the same, it's unlikely (though I admit possible) I have the virus so it's a tiny risk to take.
The observant amongst you will have noticed that the title of this post, although it's Part 3, is "Days of lockdown" without the 100.  This is because lockdown is not over, it's only eased.  Many people seem to think everything is ok now and we can relax completely.  It's not ok now and we can only relax slightly.
Many of my friends think the same as I do but they all have tales to tell of their friends who don't.  I really don't understand where people's head are at.  Hundreds of new Covid-19 cases every day in the UK and many deaths EACH DAY.  Occasionally you get a low day, 9 or 12, but often it's still over 100 deaths in a day.
So are there any plus points in my new normal?  Yes.  I've had my house repainted on the outside.  A flash of inspiration about how the colour would show the garden to its best advantage now that I'm able to spend more time there, and now here is crocosmia in all its glory. 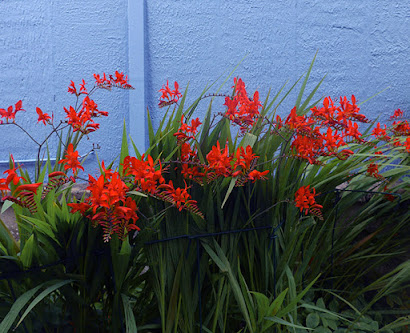 Secondly, I've not been anywhere or done anything to interfere with my weight-loss regime so have been able to stick to eating very strictly four days a week and relaxing completely at the weekend, with the result that I have already exceeded my annual target of losing 7lbs during the year.
Thirdly - and this is not as incompatible with secondly as you'd expect! - I have discovered that after all fresh yeast is so much better than dried.  For a long time when lockdown began, dried yeast (and flour of any sort) wasn't to be found anywhere but our healthstore had fresh yeast and strong flour.  We had no shortage of bread but I decided retirement was as good a time as any to resume making my own bread.  It's been a great success and I've branched out to focaccia, and almond croissants (see top photo) which are a favourite of mine.  All delicious.
And that's it.  There have been other positives in my life but they either haven't been as a result of lockdown or have been second-best alternatives to seeing people regularly.
The next post in the series will broaden out, I think.
P.S.  I see I used the picture of the almond croissant before.  But I'm leaving it, because it was that good.
Posted by Cloth and Clay at 9:39 AM
Labels: life, thinks