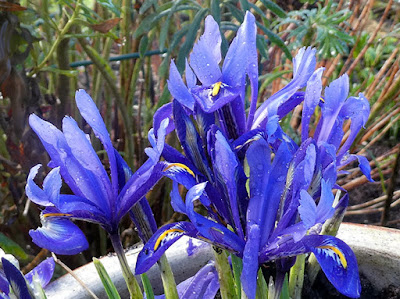 I'm cheating with this particular photo, as when I took it (early February) it didn't feel at all like spring.  The flowers are so joyful, though, and every year they encourage me to look forward to when spring will be here.

February, too, did feel like a never-ending month.  I often felt fatigue, I often felt depressed in spite of anti-depressants, I often felt the year would never move forward.  Of course, in one way I had good reason to feel depressed and every visit to my parents' empty house has made me ill for the first few days of returning home.

But now, early March, it does feel like spring.  There have been gloriously sunny days, with actual warmth in the sun.  I've been able to do some outdoors jobs, which includes a massive tidy-up of my biggest shed.  It isn't outdoors, of course, but as far as temperature is concerned it might as well be as it has no heating.  I booked a trip to the local tip and got rid of some huge things and now the shed looks like it never has before.  I went on my first walk since October.  I just haven't had the energy till now.

Spring is a time of new beginnings.  And suddenly I do feel I've moved forward to a new time in my life.  My mood has lifted in the last three days.  Apparently I even sound better on the phone!

Having brought back lots of tools from my parents' house, and added them to those I already had, which was more than most people have, it occurred to me that I needed to prove to myself that I could still use them and wanted to.  It has been about 18 years since I've done anything with tools other than tiling and decorating as Mike3 did everything with tools and after he died I just asked my builder friend to do all the odd jobs.  It turned out I was quite scared of trying and this has become worse as the years have gone by.  I think somewhere in there was a sense of responsibility to stay ok for my parents.  Now they've both gone, I can have a go again, and if I damage myself, well, there's nobody really depending on me so it doesn't matter.

On Friday I needed to put up a spice rack in the kitchen.  I didn't want to wait till aforementioned builder comes to do various jobs on Wednesday as it meant I could empty one of the boxes I'd brought back.  I would do it myself!  And I did.  Not entirely, it turns out, because I needed advice on using Mike's drill as it was different from my old one.  And advice on size/length of screws and rawlplugs.  But my builder had 15 minutes on his way into town and popped in and advised and now I've done it!

So it feels like spring out there - and it feels like spring inside me too.  I am moving forward, discovering rejuvenated me after a period of statis. (Blogger doesn't know the word but I'm sure all my readers do.)  Nothing I haven't been before and of course now with various age-related aches and pains but still, I feel better.  I feel like spring is happening. 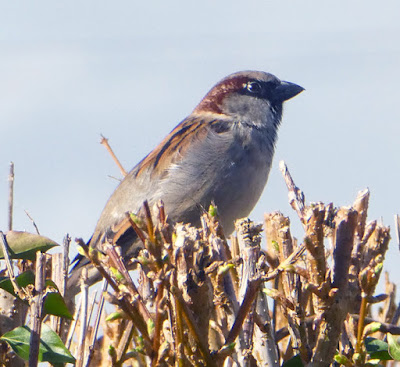 Posted by Cloth and Clay at 9:46 AM
Labels: bereavement, life, mental health