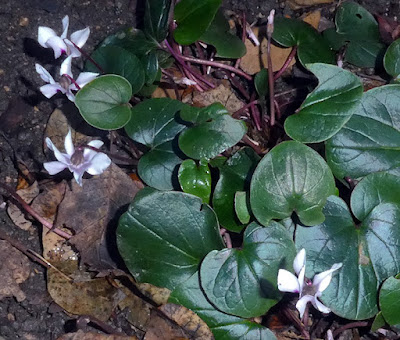 My concept of a new year is not "out with the old, in with the new", it's more "build on the valuable old to create anew".  Nothing is wasted, one hopes.  This photograph of new blooms on my white cyclamen is a case in point.  Year after year I've failed to take photos of white flowers which look anything like what one sees.  I have much experience of what doesn't work!  What I had never tried before was allowing the flash to operate if it liked and he presto! that was the answer.

There is much for me to look forward to in 2022 and a great deal of it involves the new.  I have a sense of not just moving forward, but running forward (if only I were capable of running 😉). I hope to move house and as the autumn went on it dawned on me that I am really downsizing quite a bit.  Initially this was rather daunting but having decided to make a start by aiming to fill my grey bin completely every fortnight it has turned into something of a relief and even a pleasure.  By getting rid of stuff I somehow condense what is left so that it generates so many new ideas.

I am no longer a potter.  I don't think I anticipated this, but for the past two years it's been obvious that this is what I want.  I have fired everything, kept most of the last two firings of pots for myself and am selling everything else as usual.  The kit will also be sold, although I will be keeping tools and lustres and a few decorating colours so I can do some handbuilding work if I want.  I look back on my decades of being a potter with great pleasure, it's just that suddenly it was no longer what I wanted to do.  As an artist, I find myself moving into other things - silver jewellery, photography, mixed media work and of course still textiles.  It's a huge step but somehow so very positive.

The last year there have been many changes in my life because of losing both my parents, my entire family unit, within six weeks at the end of 2020.  What I'm experiencing, as well as the loss and change from what was, is those sudden shards of light which are sparks of ideas of new things on the horizon.  They are exciting.  Some of them have become clearer and are now actual plans, others are still waiting to be unpacked.

The new house (still in Stroud, of course) is a plan: we have exchanged contracts and completion is due mid-March.  Then there will be months of development, planning permission, and finally building and rebuilding and alterations.  As time goes on, the plan takes a clearer shape.

Life is good.  There are bad things in it for sure - somewhat ropey health, illness and problems for some of those close to me, the general situation with the pandemic, to mention a few.  But life is good.

Only one question remains - my alter ego has been known as the Purple Potter for decades.  Should I change it for something else? 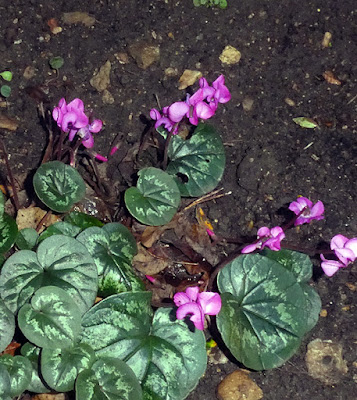