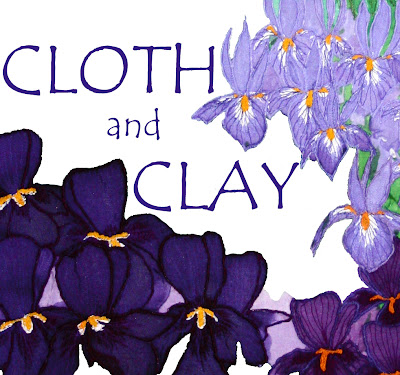 So, as I said, I'm re-branding. And this logo is at the centre.


Back in 1999 I started subscribing to UMRA , the newsgroup for the sort of people who might listen to The Archers.  It's an astonishingly friendly group and back then there was an annual BBQ which we would travel to from all over the country.  Following the 1999 BBQ, Michele was explaining to her partner "which one was Jane?" and answered "The potter in the purple socks."  And so I became The Potter in the Purple Socks and eventually just The Purple Potter.   Indeed, to this day you can follow PurplePotter on Twitter if you've a mind to. No, I'm not digressing, really I'm not.  Here's the point - if I'm going to be the Purple Potter I might as well go for it and emphasise that I'm the Purple Potter.  Why not go for a purplish theme rather than a bluish one?  My pottery display has always been on white boards and plinths and dark blue cloths.  It has always worked well with the range of glazes I use.  For the market in particular, you don't want anything too pale as it will get grubby quite quickly in outside events.  But part of the rebranding involves a gradual changing of colour scheme towards purple and its friends lilac, mauve, fuchsia, etc.

Another theme in the background lately has been what the market has been doing at the moment.  I mean the market for handmade goods, not the Farmers Market.  What I've been observing is a trend towards "Crafting" and "Crafters".  I have to be honest, there are aspects of this that I find annoying.  Crafting seems to have come to the UK from the USA and is about a new-found love of being practical and making things, mostly as a hobby and often from kits or pre-made components.  I've no argument with this per se.  As a teenager, it was just the sort of thing I used to enjoy.  The problem arises when Crafters start selling the things they've made.  If you are good with your hands and enjoy making things as a hobby, you have a completely different approach to selling.  "Oh, I couldn't sell them for what they've cost me to make!" is a frequent reason given for very low prices.  So when you put hobby crafters and their low prices next to professional craftspeople who depend on their craft to make their living, those of us who need to charge a fair rate (e.g. I aim for the minimum wage but often earn much less) look as if we're charging too high.

One positive thing the Crafting movement has done is to contribute to the reverse in trend back towards practical skills being a Good Thing.  When I started teaching in the late 70s, practical skills were popular and they were given an important place in education.  We certainly taught the theory behind the skills so that pupils learned why they were doing things but everyone had a chance to learn how to actually make things.  After I left teaching in schools things began to deteriorate - no, no, I'm not suggesting cause and effect here!  I was just lucky to get out when I did.  By the time I was supporting youngsters having problems in school I was able to see that what we had thought of as craft subjects had become design subjects.  The emphasis was on designing products, designing packaging and designing marketing.  A small amount of time was spent on making some products.  I may be exaggerating, but that was what I observed through the work of the children I was supporting.  This is now thought of as an old-fashioned view, I believe.  Others I trained with would possibly see me as out of touch.  I'm sticking to my guns, though.  I think it's great that young people should be aware of what goes into producing things and selling them but you need the product too and most skills take practice rather than occasional attempts.  I don't watch The Apprentice very often but have read about the Biscuit Episode.  For those not bothered about reading more, basically one team created a brilliant brand (aha! Is Jane returning to her theme at last?) but the biscuit inside the box was "rubbish".  That team lost.  Too right!  I'm sorry for the generation that has grown up without practical skills but it's not too late for them to learn.

Well, do you know, I think that's probably enough for today.  It turns out that Branding is a topic that will take more than two parts to explore.  Next time - more about what my brand is about.
Posted by Cloth and Clay at 10:07 AM
Labels: work