And here we have rather more of the finished product.  Cloth and Clay with the irises (from part of my large Irises canvas) plus now my tagline and some photos of pots.

I can't remember exactly when I thought of the tagline "handmade products that make you smile" but it was sometime between writing my "real deal" artist's statement and this spring.  The artist's statement has gone down well with customers and other artists alike and this tells me I'm on the right track that being straightforward, honest and not too modest about your own work is a Good Thing.  I've been describing my pottery as cheery and rustic for quite a while, because I genuinely think that's what it's like.  If you don't like cheery or rustic you really aren't going to want my pots.  It's part of what makes them suitable for everyday tableware.  This led onto the tagline because, finally, I'm just going by the reactions on people's faces when they look at my work, whether they end up buying any or not.  Generally, they smile.

This is very gratifying.  Of course, sales are important if that's how you make your living, but for me it's equally important that I can see that the work brings people pleasure.  I may have mentioned before that I don't go along with the generally British view that you shouldn't express high opinions about yourself or what you do.  For goodness' sake, I've spent enough of my life finding things I didn't think I was good at - when I think I am good at something I'm jolly well going to say so!  And I'm good at making pots, textile art and cards that make people smile.  With any luck, even the tagline itself will have that effect.

Eventually I hope to redesign my website in line with the new look.  I'm thinking that by October I may have a new look for my Farmers' Market stall, following my customary "end of season" sale there in September.  However, I've already launched the new look for small events with the first one last Sunday at the Wearable Art Painswick festival.  There were craft stalls outside, which I would have liked but they were taken by the time I applied, and a large number inside the Painswick Centre.  As is usual with craft shows, each exhibitor gets one table, generally about 6' x 2'6", and I've rarely done these sort of events because it's difficult to display much pottery on a small space.  Eventually, however, I've become the proud owner of a folding bookcase, which I've been on the lookout for for a few years, and so Painswick was a trial run of my new craft show display.

The hall was fairly well packed with stalls and I was in the centre section so behind me were the backs of other stalls and then the fronts of those against the far wall.  These being rather distracting in my photo, I've blanked them out.  No offence to any of the other stallholders! 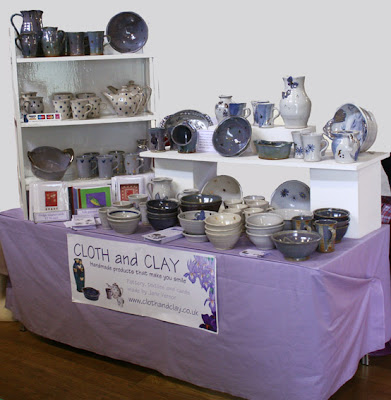 I think it worked pretty well.  A friend described the display as "fresh", which I like.  I'm hoping it's also girly enough to fit in with the trend for "pamper evenings" as they seem to be very popular at the moment and I'd like to see whether people consider treating themselves to a new mug or dish to be pampering.

The Cloth and Clay and colour scheme will be, for the time being, permanent fixtures, and I'll use different words and possibly pictures according to occasion and use.

There.  Thats' the branding theory written about for the time being.  Now all I have to do is finish the practical!
Posted by Cloth and Clay at 5:07 PM
Labels: work