Coming back into fashion

Don't hold your breath.  In the grand scheme of things I don't move quickly, but I'm coming back into fashion. 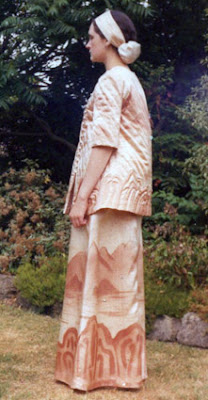 It all began nearly forty years ago at college.  I won't write about how I got there just now but I should say that for the first three years our main subject was called "Dress and Textiles" with the emphasis on Dress.  It took me about 18 months to cotton on to what was required.  I thought I just had to demonstrate good dressmaking skills whereas what was really needed was innovation.

The top designers of the day were people like...  er ..oh yes,  Bill Gibb and ...  er ....  oh dear.  I really can't remember any more.  Because I only really noticed Zandra Rhodes.  And when I suddenly understood that each design brief was an invitation to do exactly as we wanted, I took off.

This assignment was to design and make an outfit based on an ethnic source.  I printed the design (based on old Chinese landscape paintings) on satin and the top had a chinese-style jacket openening with rouleau loops and covered buttons, all heavily influenced by Zandra Rhodes. 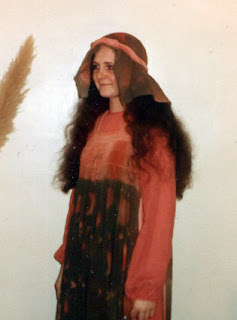 Here's another, possibly my favourite and I think perhaps the first one I designed after realising you could make what was in your head, no matter whether anyone had seen anything like it before. 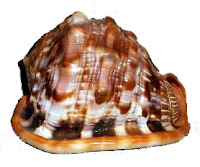 In case you're wondering, the idea came from a photograph of a green and salmon-pink conch shell, a little like this one, only with bottle green on the widest parts of the shell:

See?  No?  Oh, well, turn the shell 90 degrees anti-clockwise.  There you have it.  The salmon-pink border is the muslin underdress, plain salmon-pink.  The cheesecloth tabard is made of one huge piece of fabric, (well, two, one back and one front) printed and then smocked over the whole bodice to create those  little lines you see on the shell.

I should mention that when I say printed, what I actually did was make card masks which I pinned to the plain white fabric.  I then hung the lengths on the wall in the print room, mixed my dyes and applied to yards and yards (well, they were all yards then, not a metre in sight) using only a spray diffuser.  Luckily I was a clarinet player and knew about breathing.  It was impressive, none the less.

So there we were, immersed in fashion for two or three years.  When I say fashion, I do of course mean the sort of things worn on catwalks and shown in Vogue, not what the woman-in-the-street was wearing.  I did wear my outfits, though, at parties. I'm sure many of the others on my course continued to be influenced by and to some extent work in the world of fashion.  By the time we had to specialise in our fourth (degree) year, though, I had become more interested in our 'second' subject of textiles: construction, dyeing and embellishment, and I drifted away from fashion completely.

Now, I'm coming back into fashion.  Where the development of my work and business is concerned, though, I do play a very long game indeed.  And I'm talking very small scale.

I'm not known as the Purple Potter for nothing -  I do wear a lot of purple, with red, pink and couple of other colours thrown in for variety.  There are many colours I don't wear and some I really can't as anything remotely green tinged does hideous things to my skin.  I do love all colours, though, and enjoy seeing other people wearing them, so I'm going to make silk painted scarves.  I bought some scarves to try about three years ago, last summer I decided to get on with it and last week I made my first scarf.  I'll do a second and possibly a third this week, just to establish what I want to do and what materials I might need to order and then I'll be putting the project aside until later in the year.  As I said, the long game.

There are other ideas bubbling away in there, though.  Earrings and brooches to go with the scarves.  Friendly plastic.  I'll say no more for the moment, but watch this space.  Eventually.

Posted by Cloth and Clay at 9:14 AM
Labels: textiles, work