I've not been quite well.  Most of my general malaise has been caused by antibiotics, which I finished yesterday.  This afternoon I've been womanfully resisting going to bed for a sleep because I Must Be Better.  Well, I am, enough.

So yesterday and today I finished my filing.  Some of this filing goes back about 9 months because last time I did it there remained a few categories unfiled which went back into the filing tray.  But now it's finished.

So far today I have been fairly productive:  a useful Team Viewer session with Dad, helping him create some labels, researching suppliers of silk dupion for my next batch of textile canvasses, and one or two other desk jobs.  However, steam having more or less run out, I didn't feel well enough to do anything else remotely demanding so I thought I might take on the Magazine Mountain.

Some months ago I resolved to reduce the pile of magazines waiting to be read by trying to read one per day until the mountain became a foothill.  (I have other piles of magazines - those needing filing in order, those needing culling for recipes or pictures, etc.  This pile is magazines I receive on subscription and is the Magazine Mountain.) My resolve didn't last, though and the Mountain has achieved new heights. 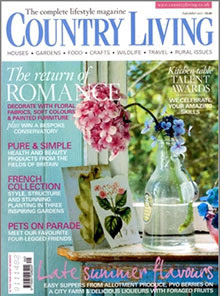 Mum buys me Country Living on subscription.  I've been getting this magazine one way or another since it first came out, which I think must have been in the early eighties.  It used to be much more about the sort of life I led or would have liked to.  These days not so much but it still has the sort of recipes and food articles I like and pictures of homes I'd like to live in if someone would like to give me the million pounds or so required to buy one.  I enjoy the magazine, though.  As much as anything, I enjoy the way the various section editors use colour and often harvest photos of things just to remind myself of colour combinations.  There are interesting bits and pieces to read, too.  I keep some of the back copies so that if my parents come and visit there are some for Mum to read, but as they don't visit as often as they used to there is less need for this.

Country Living is issued monthly and I probably read most issues before the next one arrives.  They then go in the pile, for Mum to read when she visits or, if older, for cannibalisation by me before recycling. 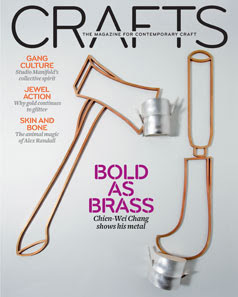 I've written about Crafts magazine on this blog before.  In brief (well I'll try, but you know me) - I've subscribed to Crafts almost since its beginning.  I'm missing about 5 issues from the first 18 months but other than that have every issue published.  It's rarely about anything resembling the sort of work I do and yet I still find it occasionally inspirational and always at least pleasing to look through.  Back copies are now stored under and behind a table in my attic studio.  They're still available if I crawl under the table.  There's a general principle of moving copies to "back copies" status at the end of a calendar year or sooner if I've finished reading them.

Crafts is published bi-monthly.  I rarely read it straight away and it became something of a casualty during the Pear-shaped Year.

Ceramic Review is also a bi-monthly magazine.  I probably find it less inspirational than Crafts because my ceramics work is slow to change and progress.  Making, as I do, primarily tableware for everyday use, for the most part I'm content to maintain (or during and after the Pear-shaped Year try to catch up with) stock levels of the things that people always want while occasionally doing something a little different just for variety.  Some of the articles in Ceramic Review are very informative, though, because even if they are about processes or materials or styles not relevant to my work, some of the information or ideas are transferrable.

A year or so ago I contemplated going through all the back issues of Ceramic review, removing and filing all the articles I thought would be of future interest and recycling the rest.  This idea was met with such horror by John West of Lansdown Pottery, that I just couldn't go through with it.  So back copies of Ceramic Review are filed on a shelf in the study, behind the table (so you have to pull the table out to access them, but not exactly underneath.)  The problem with this is that they have filled up the available space and are now being stacked flat on top of the row.  Not ideal and eventually, (soon?) this space, too, will be filled.  And what will I do then?

The Magazine Mountain lives just underneath the calendar on my desk.  Well, that's where it started out.  As the Pear-shaped Year and it's only slightly less busy following friend progressed, the MM grew so that this morning I noticed it completely covered the calendar, which has therefore to be taken down to be consulted.  This Will Not Do.

I enjoy using the malapropism of magazines on prescription anyway, but allofasudden it struck me - is that what these magazines have become, a prescription?  Something that is good for me so I order it, pay for it and bring it in to my home with the best of intentions but rather less conviction.  Do I get Crafts and Ceramic Review because they're professionally Good For Me or because I really want them?

I'll fess up.  I dismantled the MM and distributed it into the piles of three publications.  There were 11 copies of Country Living, all at least partially read and most just waiting to have pics cut out.  It's less than a year's worth, anyway.  Remember, Crafts and Ceramic Review are bi-monthly.  Of each of these, there were 18 copies, that's THREE YEARS' worth!  And, (my name is Jane and I'm a magazine non-reader) there were 16 publications that had not even been taken out of their polythene wrappings.

So - what to do?  Catch up with my reading, file and promise to read all magazines on receipt?  Cancel one or more subscriptions?  Continue, but start marmelising the back issues into lever arch files so the rest can be recycled?  (Sorry, John.)

Suggestions on a postcard.
Posted by Cloth and Clay at 4:39 PM
Labels: reading, work