Eventually today was the day to return to my set of three landscapes that were begun last September, interrupted for lots of irises and sat around patiently waiting for me. I've been trying to face up to the challenge of continuing something that was already in my head without the sketchbook where I had recorded my ideas (which unfortunately I have left at home in my studio.) Things did not go well at first.

Taking a drink (and a chocolate eclair) outside, I suddenly found myself taking photos of creatures keen to camouflage themselves. 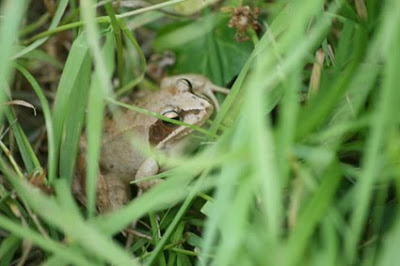 This chap is small - head and body about 8cms long. Being rather dull and plain light brown colours you'd think we couldn't miss him in the lush green grass, but in fact every time we looked away it was quite difficult to spot him.

At first glance I wouldn't have said the plum tree offered much cover to a camouflaged creature unless it was green but then suddenly two things appeared which were surprisingly different from my idea of a plum tree and yet kept losing themselves as soon as I took my eyes off them. 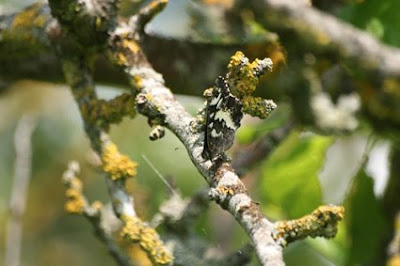 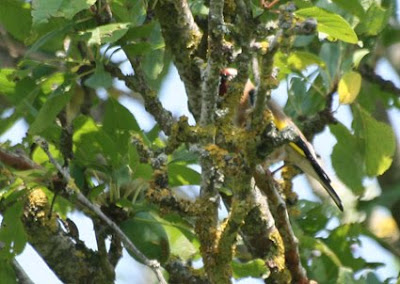 The swallowtail flew off too fast for me to capture his open wings but eventually the goldfinch (kept typing goldfish by mistake!) moved out into the open and I was rather pleased to get a clear shot of him in all his finery. 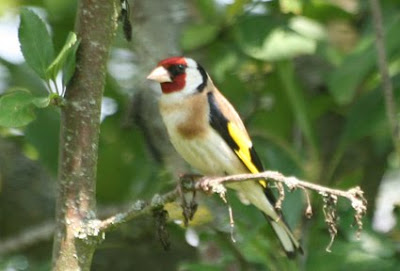 Posted by Cloth and Clay at 4:16 PM
Labels: photography, wildlife