The greenhouse project - concrete but still not concrete 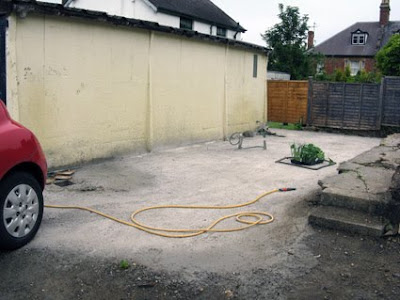 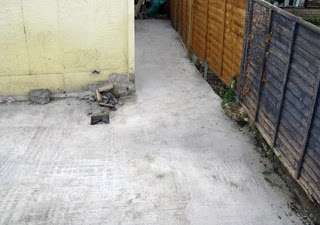 I know you have all been on tenterhooks waiting to see the finished concrete.  Well, one or two of you have commented that the photos were still not up.  So here they are.  Concrete more or less finished but the greenhouse itself still not concrete.  We're getting there, though.

Last Monday turned out to be the hottest day of the year which meant that the concrete was particularly difficult to get into place before it had set too much.  The worst weather for concreting, I am told.  There were one or two other hitches, such as one helper not turning up because his wife hadn't passed on a message (!)  and M suddenly feeling unwell just as the readimix had arrived.  He's fine now, though waiting for clarification from the doctor about what he should be doing now.  The answer is currently, nothing until we have clarified things!

But anyway, here is a lovely new stretch of concrete.

Actually, it seemed the safest place to put them, surrounded by copper piping, to protect them from the slugs.  Hope to get them out into the garden in the next few days.

In other news ....  well, really there is very little other news except that I am still either doing work for the Arts and Crafts centre, trying to catch up with household stuff or being too tired to do my own work anyway.  Bit of a grumpy stage, I have to confess.  We are delaying our trip to France but even so I don't see when I am going to catch up with my work.

Off to acupuncture this evening, which will no doubt put me right in a couple of days and I hope to get blitzing then.  In the mean time, think yourselves lucky I've found a couple of minutes to write here!  (Or not; this is not the best-written piece I've posted here, I know.)  I'm sad at how little time I have in my life at the moment, particularly because it means I don't get a social life and don't get to see my friends.  I know I've seemed to neglect everyone, but it's not intentional, just an unwanted result of having too much to do.

If only I could post a scent.  The honeysuckle has been spectacular this year.  You can even smell it from an open window on the opposite side of the house.
Posted by Cloth and Clay at 12:21 PM
Labels: friends, greenhouse, work