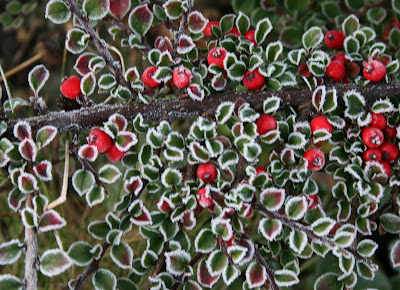 If you say you are feeling seasonal at this time of year, people automatically think you mean Christmassy, but that isn't what I mean, really. I do mean that I feel "in the season." I have felt increasingly comfortable with this over the years.

I am fortunate not to be one of those people who suffers from Seasonal Affective Disorder (but I have every sympathy with those who do.) I have always been able to appreciate the good things about winter. It's a time for sitting indoors and doing indoorsy things like sorting out the filing cabinet, catching up with the mending, indulging in films on tv in the afternoon and drawing the curtains against the world, lighting a fire and mulling some wine. I've nothing against the world, or the rest of you in it, but I do like to be shut away sometimes. At this time of year, if there's a day on the calendar with no going out and no visitors, I relish it. Even more than that, I luxuriate in it if it's one of the rare days I'm on my own in the house.

Digressing slightly, it seems to me that only children are not just more likely to enjoy their own company and for longer but also often have a real need for it. I was discussing this earlier today with another friend who is an only child and feels just as I do. My first husband was an only child and we had separate spaces in the house, joined by an intercom. It was perfectly acceptable to turn down a suggestion by the other to do something together; we both had a need to do this sometimes. M was not an only child, though he spent much of his childhood on his own, not getting on with his sister. He has the opposite need, though: he hates being on his own. So we muddle along and compromise and have worked out a life that feels good for both of us, but I still long for more time on my own sometimes. This is complicated by the fact that I am a real home-lover so would rather be on my own at home than go out on my own. Winter is particularly the season for this. However, as I say, we seem to have grown into a life that generally suits us both.

I've always made my own Christmas cards and some presents and December is usually the time for these activities. I always give edible presents in some form or other these days. Jams, pickles, fudge and roasted walnuts all go to various appreciative homes. Some of these are made in other seasons and in particular there's nothing like a jar of apricot jam for capturing the taste of a French summer. Some, like the fudge, are made nearer Christmas. I should be getting on with that soon.

I've been busy making some other presents in the last few days too. These can't be mentioned yet as it would spoil too many people's surprises!

What I haven't done yet is to make my Christmas cards. The photo above is what I used for my cards last year. Sometimes I use photos, sometimes I cut paper shapes, sometimes I paint one design and print off copies. I don't actually know what this year's cards are going to be and the time is getting near when I should start writing and posting them.