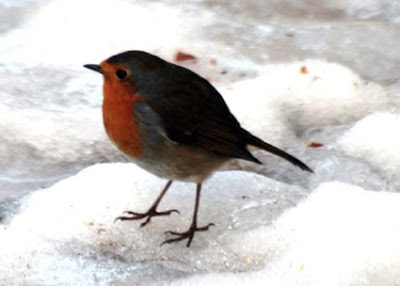 Not the very best robin pic you ever saw, possibly, but not bad considering it was taken through a double-glazed door.  We spent Christmas with my parents in Henley which, weirdly, really was one of the snowiest places.  As we travelled down from Gloucestershire on the 24th, we decided that there must have been a big thaw since we spoke on the phone the previous day - until about 5 miles from Henley when suddenly fields were completely white and the road was bordered by those small banks of re-frozen snow and slush that you get when roads have been cleared but temperatures have not risen.  This was a totally different landscape from the one we had left in Gloucestershire, in a reversal of the normal distribution of snowy, icy weather.  The main road might have been cleared, but residential roads certainly weren't and we had some trouble getting off the cul-de-sac onto the driveway.  Christmas day was sunny and the thaw was certainly under way but there had been plenty of snow and so we had a traditional-looking White Christmas.

I've always felt that the week between Christmas and New Year is a season all of its own.  It's one I really like, though I don't get to spend it quite the same way as I used to now that I live with someone else.  There is a level of consciousness which hovers about the line between conscious and subconscious where one finds ideas and feelings which are recognised if thought about but operate anyway if they're not thought about.   For me, ideas, feelings and resonances about seasons are in this place.  Below is a list that belongs to this particular season.  It's a list of things I like to do during this week.  Maybe it will ring some bells with you too.

Looking at the list, most things seem fairly prosaic and many don't seem to have much in common.  For me, though, there is a general feeling that runs through this "between" week that is often prompted by the activities above.  It's a time when new ideas pop up.  Clearing out the old, slowing down and relaxing or just noticing things are all good ways to open the mind to possibilities, probabilities and general looking forward.
Posted by Cloth and Clay at 2:10 PM
Labels: seasons, thinks