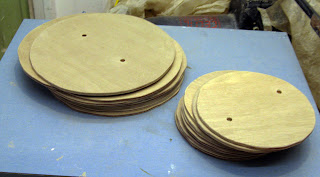 I'm sorry about the title, but I couldn't resist.

As I mentioned recently, I've been making my own batts. You can buy them ready-made, of course, but large ones cost about six pounds each. I made nine large ones, ten small ones and four pot boards from one eight by four sheet of marine ply which cost me less than thirty-five pounds. Do the math, as they say in the US. It's not only the money, though. I really enjoyed working with wood again.

Since M came to live here I've hardly so much as sawn one cut of wood because he has skills in traditional blokish things like building and working with metal and wood so I have mostly handed things over to him that he can do. What he doesn't have, though, is finesse of measurement so when we finally decided that we would have to make a new towel rail, a sensible sized replacement for the broken one being quite impossible to buy, I became a little more involved. First, M suggested I provide him with a template for the rounded ends of the pole supports. I asked if he would like me to cut them with the jigsaw as well and, slightly to my surprise, he agreed. He has a jigsaw, of course, but I've had my own for about twenty years so I fetched it out of the cupboard from exactly where I knew it was kept (disorganised, him? surely not!) and set to. It took a little while to remember the best way to use it, but I really enjoyed working with wood again.

Once upon a time, when I was a full-time teacher, in the days when school holidays were holidays for teachers as well as children, I did all my own DIY. I didn't do any plumbing or electric work but there wasn't much else I didn't have a go at. Not just DIY, either. In my twenties I learned to make a lot of different things from different materials. I must have earned a reputation for it, too, because I remember buying a rather nice little rush-seated footstool and being asked whether I had made it myself. I think people expected that if you could make something, I had. It wasn't far off the mark. Gradually, though, work took a larger part of my time and in recent years I've hardly had time for anything else. So it was a great joy to be making the towel rail components. Having cut all the pieces, I used my electric sander to round the edges further. The project now awaits the next stage.

Having got out the jigsaw, this led naturally to the decision to make my own batts. Throwing batts have to fit tightly onto the wheel and the usual way is to have two metal pins in the wheel and two matching holes through the batts so that they just sit in place. I had never had a wheelhead with the holes in before so my last lot of batts were cobbled together with a home-grown system of four blocks screwed to the back of the batt in such a way that it gripped over the top. It worked fairly well but over the years the batts have warped and slightly shrunk so that the fit is not so tight and some of the batts go up and down as they go round. So - new wheel, new batts.

Cutting the rounds was fairly easy. They're not perfect, of course, but they don't have to be. Drilling the holes was more difficult. There were not many that were exactly right first time and I still don't really know why! It wasn't difficult to enlarge one of the holes in the right direction, though, and all the batts fit just right on the wheel. I shall be using them next week.
Posted by Cloth and Clay at 8:45 AM
Labels: pottery, thinks, work