Not so long ago people used to say that we didn't have real winters any more. Then last year we had some serious snow for a week or so and people said it was a proper winter. Now we have winter. I don't remember hearing so many people in so many ways complaining of the winter for a long time. I really hate the cold. I don't cope well with it. This week I have been working in the unheated end of my reinforced concrete pottery doing woodwork (which I will write about some other time.) We insulated most of it a couple of years ago but the cold naturally comes up through the floor and the wooden doors and, of course, through the walls too eventually and it is perishing in there. I've been working up to an hour at a time until my feet (mostly) and hands and back can't stand it any more, by which time I end up feeling angry. M understands I am just raging because I am cold but I don't expect it makes it any nicer for him!

At the other end of the cold spectrum, if it is only just colder than I need, I tend not to notice for a long time but get progressively chilled through until I am just not functioning properly. At this point I usually think "I'm not functioning properly. What's the matter?" and after a couple of minutes work out that I have got cold. I then need heat, rather than warmth, to get warm again and then I can feel my brain perking up and starting to interract with the outside world again.

It's for this reason that I keep my house warmer than a lot of people. Nothing excessive. 21degC in any room where I am sitting still, because that's when the chill starts. I suspect that other people on low budgets don't pay for such high temperatures, though, and I can end up chilled after a visit to friends' houses. We're all different in our reactions to hot and cold. One degree lower is enough for me to chill through but I think I'm probably in a minority. As I wrote a few weeks ago, we are experimenting with having most of the house slightly cooler and being disciplined about shutting the doors on the rooms where we sit and I think it's working. I seem to have saved £10 per week on gas and electricity in January compared with December by doing this. I may turn the thermostat down a little more. So long as the radiators in the sitting room and study are turned up and the doors kept shut, I should be able to avoid the slow chill process.

So anyway, we've all noticed it's winter and the forecast doesn't promise anything different happening any time soon. What is different, though, is the light and this really does help how we all feel. We've had little bits of sunshine here and there last week, though they don't last long. Yesterday afternoon we had one such spell and set out to take some photos, but by the time we got to Cherington Lake the sun had gone.

In spite of the returning dullness, though, the sight of massed snowdrops was immensely cheering. I've been thinking of making a snowdrop picture and yesterday's photos may just be enough to get me started on one.

...can Spring be far behind? 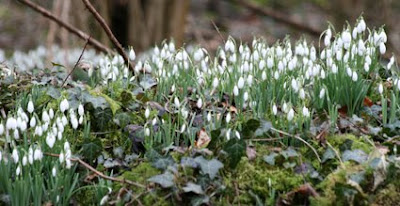 Posted by Cloth and Clay at 11:50 AM
Labels: photography, seasons, work