Everyone needs the arrival of the cavalry once in a while.

The forecast promised a dry weekend so M hired a pneumatic drill to break up the old concrete on various levels that's going to be replaced by new and on part of which my new greenhouse will one day reside. He knew he would need a bit of help shifting the stuff up to the tip but then someone responded to my offer of hardcore on Freegle and said he would load the rubble onto the trailer as it was created. 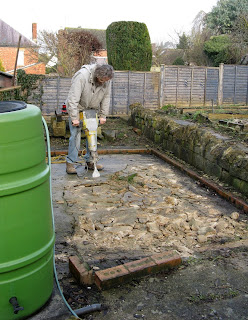 So on Saturday morning M went to work. To begin with it was not promising. The first bit of concrete he tried seemed very sandy and the drill just went downwards rather than breaking anything up. Fortunately, as he moved back the concrete took on a more expected texture so his drilling work was breaking the stuff up into chunks. Just as his spirits were lifting again, the Freegle chap said he had hurt his back and couldn't collect the stuff. We had started loading the trailer so M took the rubble over for him, but he then said he didn't want any more.

M had expected to do the breaking up over the weekend and ask for help with the taking away but it became apparent that the two jobs needed doing in tandem. The person we had hoped to get helping seemed out of contact so it looked like M would be working alone. I tried some loading into the trailer but it wasn't doing my back or ribs any good, so I wasn't going to be able to help any more.

We were going out in the afternoon so it wasn't a long day's work, but even so M made great progress: 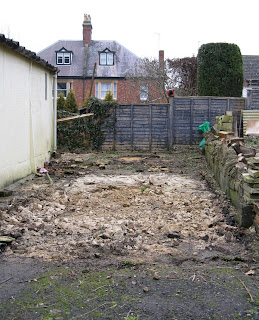 So, we bathed, changed and went and had tea and cake to celebrate J's birthday. Very pleasant company, delicious cake and progress had been made on the concrete work so we felt pleased with the day. However, shortly after returning home we had yet more icing on cake in the form of a phone call from the cavalry, who had been out of mobile signal range all day but had now got our call for help and would arrive on Sunday at 9.30 a.m. Hurray! 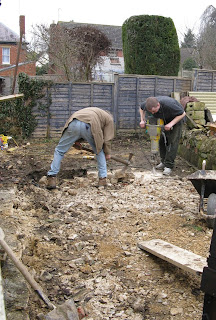 The cavalry has never been so welcome nor done such a wonderful job. M has discovered that he is even less fit than the last time he did this sort of stuff three years ago but when D got to work, M realised just how much difference 35 years makes! Not only that, but the bit M had removed on Saturday turned out to be of rather lesser quality and thickness and the next bits were really hard going, even for a fit 32-year-old. 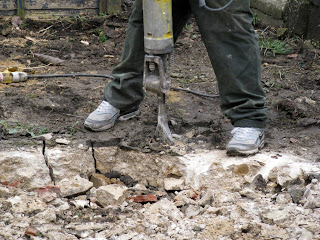 Fortified by scrambled egg and beans, they worked on in the afternoon and by the time they stopped work had got much more done than M had expected. As well as the main area, old concrete has now been dug up behind the pottery and in front, where it had been rising up over the last six or seven years so that opening the big doors was sometimes a bit of a struggle.  Instead of having to make endless 40-minute round trips to the tip, a new home was found for the hardcore where some hardstanding is being created, so it really was an excellent day's progress. 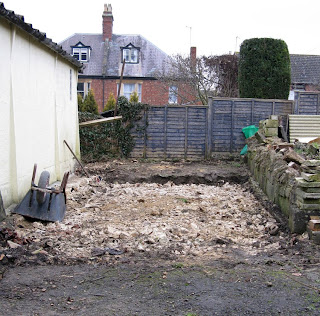 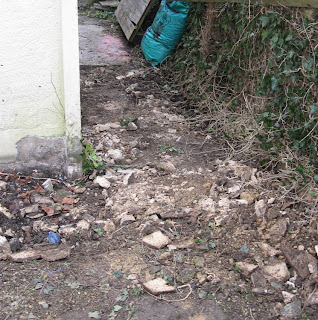 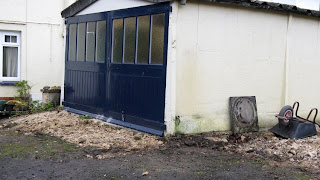 Next: removing the excess soil and rubble at the back of the site, but that is for another day.
Posted by Cloth and Clay at 3:33 PM
Labels: greenhouse