Well, it is at least the first time I've mentioned them here but to be fair, I did announce them on Twitter and Facebook some time ago and some have been in the shops for the past week.  However, I promised to write more about my Valentine cards and here they are. 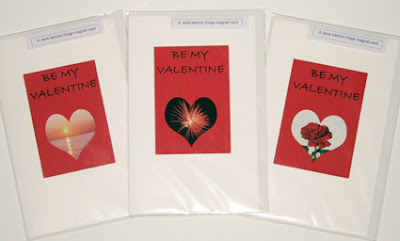 I've never made Valentine cards as such before, although I have made silk-painted cards with hearts in.  These tend to go throughout the year, though I did initially make them one February.  These cards here, though, are definitely very seasonal.  After 15th February I'll bring them all home again. 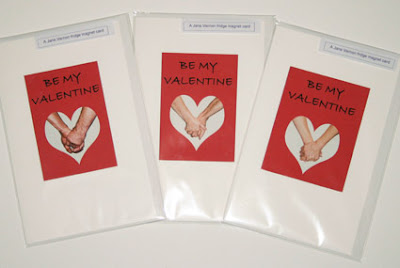 You can probably see that once again I've been at PhotoShop with the heart masks, only this time went a bit further.  I've used my own photographs.  It was surprising to me how quickly photos taken for quite different reasons turned slushy with a bit of red surrounding them.  But then, some people like slushy.  M does, for a start.  The one with the rose would be the sort of thing he would choose for me.

Anyway, as well as being Valentine cards, these were the first Jane Vernon fridge magnet cards.  I've been meaning to make them for a couple of years and had all the stuff ready.  Who knows what moves an idea far enough to the front of my brain that it's the next thing I do?  But here they are.  After Valentine's Day is over or at least after you feel cards should no longer be on the mantelpiece, simply peel off the magnetic image and stick it to your fridge, freezer or filing cabinet.  I'd certainly be happy displyaing "Be my Valentine" on my fridge all year round, though of course I realise I'm unlikely to receive on of these myself. 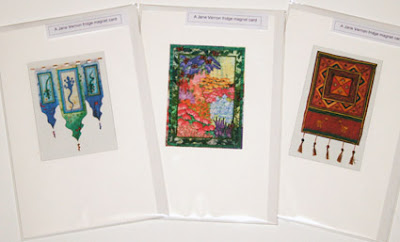 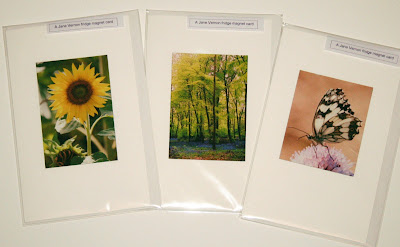 Today I've been putting up the exhibition in Nailsworth. It doesn't open until Tuesday, so I'll save the photos until then.
Posted by Cloth and Clay at 5:49 PM
Labels: cards