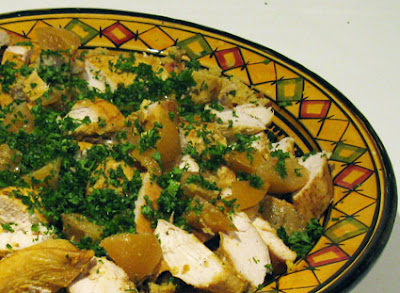 You can tell that life is slowly returning to normal because at last we had some friends round to dinner yesterday evening.  And this was it.  I also managed to start doing something I've been trying to get round to for a long time - photographing food and photographing my pots with food in or on.  These are two different projects.  The photographs of food are to accompany recipes in one form or another and those of my pots with food are a project I have in mind to do with marketing the pottery.  However, there's nothing to stop the same meal being used for both purposes.
In case there's any doubt, the platter above is not one of mine.  It's a gloriously coloured Tunisian dish which I bought at a French market a few years ago.  It sits on the shelf in the study/dining room where it goes splendidly with the decor and occasionally it gets put to use.  This time for the geographically close Moroccan Chicken with Preserved Lemons and Couscous.
As with most recipes, I'm gradually adapting this one for our tastes and needs.  It should have a red chilli in it but M detests anything above the mildest warmth in spices so I leave it out.  I don't quite detest fresh coriander, as I used to, but I still dislike it, so I replace it with parsley.  And so on.  Anyway, it's a lovely dish.
To go with it I served French beans sauted in butter and garlic.  I don't usually buy imported veg if I can help it but these were just the right thing to go with the dish, and I figure that whatever the other costs, Kenya is full of farmers who've come to rely on being able to sell their beans to Europe.  So, once in a while.  I also made aubergines with tomato.  I really love this simple dish and have no idea why I don't make it more often.  There was not nearly enough of the leftovers for my liking.  But here is the dish before we tucked in: 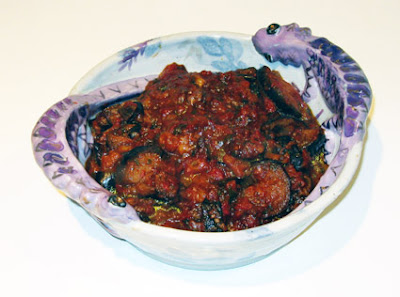 But what is this?!  A lizard!  Yes, here's a finished lizard.  Now, some of you might be thinking, "ooh, that's nice, so that's what the lizard vase will look like."  Well, who knows.  Lizards, as I mentioned in the last post, are tricky blighters.  At one point a few years ago it was a common cry over the phone to H, "Another dead lizard came out of the kiln today."  I was probably losing at least half of them in the firing.  Another aspect of this particular lizard is that he was painted with dark green lustre and light green lustre.  What?  He's purple?  Oh yes, so he is.  Well, them's the breaks.  Green lustres often turn out purple.  Nearly always in this pottery.  The only time they don't turn a beautiful rich purple is when I use them to paint irises.  You may remember this post.  If you look at it again and compare the colour of those irises with this lizard, you'll see what I mean.  So - what to paint the lizard with?  But this is not a post about pots, it's a post about dinner.
So finally to pudding.  You might wish to call it dessert.  But however refined the dish, I prefer pudding. 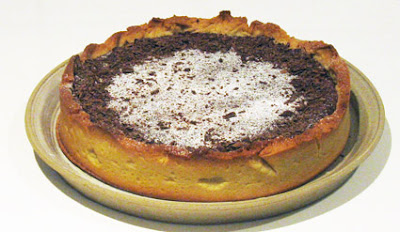 I hadn't made this chocolate tart before.  The chocolate part was certainly exactly as described.  But what's with the pastry?  As I was making it, I thought, "This is shortbread with egg in it."  I sort of expected something light and crumbly like shortbread, therefore.  What I got was hard.  You could eat it ok, it wasn't so hard as to be too unpleasant in the mouth.  But it was one of those things that at any minute was going to embarrass somebody by shooting across the other side of the room.  Miraculously, we all avoided this faux pas.  Next time, though, I'll be making different pastry.
An another thing - how do you get proper chocolate curls with a vegetable peeler?  I just get these shavings.  Tasty, but not particularly decorative.
.......and lunch 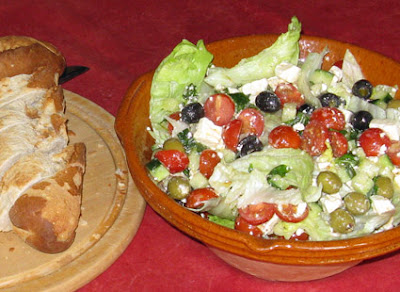 We don't usually have fancy lunch hereabouts, but we had visitors doing a tour of family in Gloucestershire and I suddenly had a whim to pretend it was summer.  I make this fairly often in France and it was a nice promise of things to come.  The evenings are lighter all the time, I went to the supermarket without a coat today and the hellebores are coming into flower.
Posted by Cloth and Clay at 4:00 PM
Labels: food