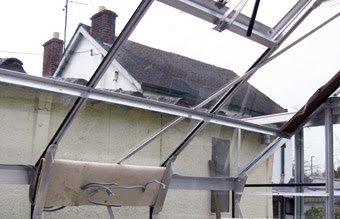 Remember the greenhouse project?  You'd be forgiven for not doing so.  I guess for most people outdoor tasks ground to a halt once the frosty and then snowy weather set in and even after that an aluminium greenhouse is not a place to work in the winter.  By the time it might have been warm enough for M to start the wiring, we had both forgotten all the careful planning of how things were going to be attached so then M had to wait until I had a chunk of time to spend with him working it all out again.

Along with the mounting for the cables, we also had to plan out where to attach the patent shelves I've always used in a greenhouse.  This goes back to 1983, when I had a conservatory, and I've used the same method ever since.  Basically, you have two battens running from end to end of the greenhouse, supported on brackets.  They are spaced so that standard seed trays can straddle them.  When seedlings have been potted on and the seed trays removed, plants can grow up between the battens.

I bought brackets and little angle pieces with the greenhouse and all of these fit easily into channels in the main vertical struts of the greenhouse.  Unfortunately, there aren't these grooved struts in every part of the thing; some pieces are smooth, so we had to devise methods of support for the places where the brackets wouldn't go.

The photo above shows wiring in progress.  The one below shows it in use. 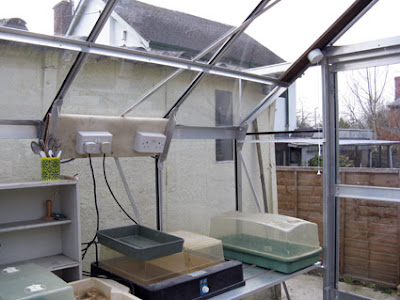 We worked on the same principle as wiring up a house - imagine all the things you want to plug into sockets and then add at least one extra per room.  I wanted the light switch to be at the end nearest the back door of the house and the pottery, but M suggested a two-way switch so we can use the light as a yard light if we need one.  You can see here one light pull and two double sockets.

Once the wiring was finished it it seemed the greenhouse could be used, even though there are things about it not yet finished.  As it was my birthday, therefore, we had a greenhouse-warming party, pictures of which can be seen here.

Next, I have been putting up insulation.  I wanted to get this prepared while the greenhouse was not only dry but completely clean as I've used stick-on Velcro to attach it. 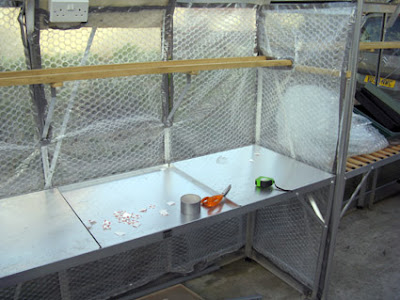 The pieces of bubblewrap are cut to shape and then bound all round with duct tape.  It will be very quick to remove and replace at the beginning or end of a season.  Now, all we need is some plants .....
Posted by Cloth and Clay at 6:58 PM
Labels: greenhouse