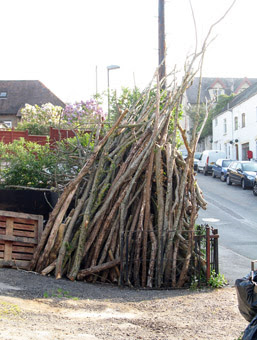 Well, do you know, I've been sitting here for about ten minutes trying to work out what I want to say.  And then eventually I realised I don't really want to say much about anything except our firewood.  This may make for a dull post, I suppose.  But it's exciting to me!

First of all, here's the final woodstack by the gate.  See how the pedestrian gate is completely obliterated (not that we use it) and the big gate not able to go all the way open. 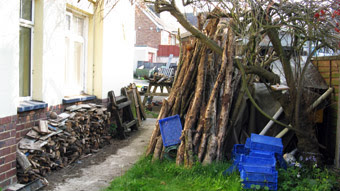 Then around the side of the house there was more wood, sawn up but not stored in the woodshed as it was collected during the time we were actually taking dry wood from the shed to burn.  More trunks stacked up against a pile of wood sat beside the blue shed.

The weather has of course been unseasonably warm for a while but M decided at the beginning of the week that it was time to saw wood while we were still being promised warmth and no rain.  He pointed out that he can plumb the greenhouse if it rains and I agreed that getting the wood sawn would be a more than justifiable interruption to the greenhouse.

He has a sawbench but for a large part of the job decided to use the old wooden table we've got parked outside the green shed for just such outdoor work purposes. 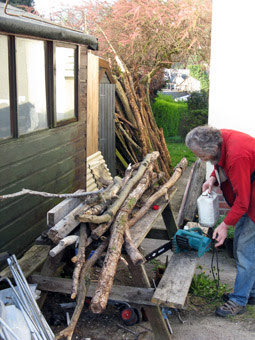 And so he set to work.  And was sensible!  Paced himself, came in for breaks without being nagged, drank plenty, had bath every evening.

Things didn't go entirely smoothly.  At one point quite  a chunk of a wall of stacked logs fell down.  They were sliding for a while, M said, and he was trying to get other walls of logs against them before they fell.  He was all for leaving the lot where it landed and stacking on top but I managed to get him to stop doing that after a short while on the grounds that I would do the re-stacking.  I like stacking logs.  Once I'd got that far, I continued to do the rest of the stacking.  I should say that M was still responsible for most of the stacking.

Anyway.  No more woodstack by the gate. 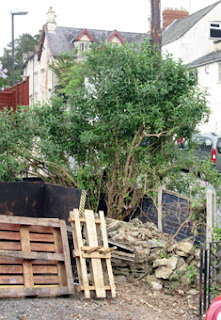 And none against the wall of the house, though still some left stacked against the blue shed.  Nothing like as much as there was, however. 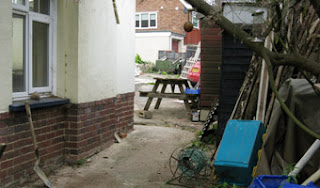 And of course you're dying to see where it all is now, aren't you? 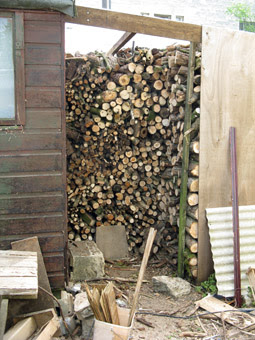 I'm disappointed with this photo because it really doesn't convey how impressive the woodshed is.  The wood is stacked up to the rafters apart from the bit you see on the left right next to the shed.  This is partly because it has to be further back there to allow for the shed door to open.  If you look at the post for June 16th 2010 you can see how much we had last year.  What you're looking at last year is the view from inside the woodshed pointing towards what you see here on the right.  This time, inside the woodshed consists of wood and just a metre square standing space. 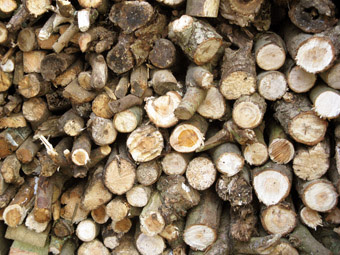 And - if you look carefully at the picture of the side of the house sans firewood, you'll see a well-swept, tidy path.  M set about this task all on his own.  I kid you not!  J & J if reading may need to sit down to recover from the shock of their dad not only finishing a task completely but voluntarily wanting to tidy up at the end.  I know I do.
Posted by Cloth and Clay at 5:56 PM
Labels: news, seasons