A little bit of alchemy - part 1

I know it's not alchemy and I know it's not magic.  I realise that to a scientist, it's just that when you mix certain minerals together and subject them to different physical conditions this will result in changes to the nature and appearance of those minerals.  However, I never got to even try the smallest taster of chemistry or physics at school so it's still possible for me to hang on to that little bit of mystery about what happens to clay and glazes when you fire them.

There are clays, glazes and firing methods which appear (to one who doesn't use them, anyway) to be able to produce fairly predictable results.   Mine are not among these.

The firing process is probably the single most unpredictable part of what I do.  I fire using gas, so that there is actual fire, flame, within the kiln chamber.  You get this with wood-firing, of course, which I love but would never have wanted to tackle myself.  I was lucky enough to spend a  week or two over a couple of years helping out at Ridge Pottery when I was still very much a learner myself and had the opportunity to fire a wood-fire kiln on several occasions.  It was daunting at first but by the second occasion I really loved the experience.  Of course I was overseen very carefully, but I still learned a tremendous amount about the process of turning malleable clay into vitrified pots as well as about wood-firing itself.

Wood firing is hard work.  It also requires plenty of storage space to season plenty of wood.  It's not for me.  However, the live flame you get from a gas firing can be the next best thing. 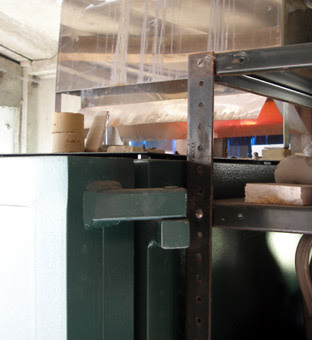 To explain this picture a little:
The lower part shows the kiln, with the light reflected very brightly off the front of the door, which explains the very light area on the left.  To the right of that is a metal shelving unit, dexion type.
Above the kiln at the back is a hood leading to a ventilation pipe.  The bright orange/red area you can see is a reflection on the inside of the hood of the inside of the chimney.  At this stage the colour of the atmosphere in the kiln will be much yellower as it is hotter.
You can also see a blue area in about the centre of the picture.  This is flame emerging from the chimney of the kiln.  (The chimney in this case is not a tall, high thing but is an area at the back of the kiln which is only the height of the kiln itself.)

Live flames in the kiln chamber also allow you to manipulate the atmosphere in the kiln chamber so you get a process called 'reduction'.  Basically, you push too much flame too fast into the kiln so that it uses up all the available oxygen in the atmosphere and has to take more from the oxygen-bearing molecules in the clay.  At the same time, the flames will be escaping the kiln.  This is what's happening in the photo.

Reduction often results in a speckled appearance but it also often changes the actual base colour of the glaze.

There are many other factors in the firing which induce variation in the finished results.  These include:
At this point some of you will be wondering why I fire by such a seemingly unpredictable method.  But maybe others will be thinking how exciting it all sounds!  Who wants predictabilty?  Well, of course, I do, to some extent.  Some of the problems I've been having with the work over the last year or so have been in trying to get to grips with how this particular kiln works best and then having got a long way in discovering that, in adapting what I do so that the differences in firing methods (tiny and subtle, but astonishing in their results) still produce results I want.

Goodness.  Sorry.  All very wordy.  But I really couldn't explain much about the firing process without.


Part 2 of "A little bit of alchemy" will be more about glazing. 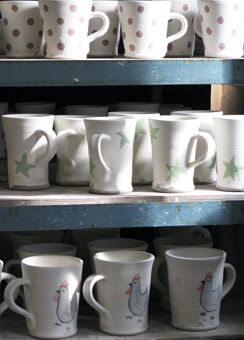 Posted by Cloth and Clay at 10:35 AM
Labels: information, pottery