A little bit of alchemy - part 2 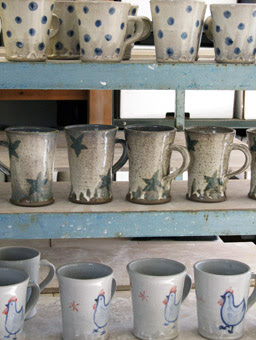 The science of glazes is, well, very scientific.  Many years ago I attended a course on glazing with Mike Bailey as a guest tutor.  Mike used to be one of the potters at Bath Potters Supplies, where potters from surrounding counties go not only for materials and equipment but for valuable advice.  Mike was always the one to ask about glazes.  As a tutor he was informative, thorough, inspiring and enthusiastic not only about what he was telling us but about what we were asking him.

As I have mentioned before, much of what I know about potting I have learned from Douglas Phillips (on whose glazing course Mike was the visiting tutor) and because he uses the once-fire or raw glaze method, so do I.  This means that instead of firing pots first so that they are 'cooked', (called 'biscuit' firing and the pots are then biscuit ware) before glazing and then re-firing to a higher temperature, I glaze the bone-dry pots and then fire once.  This saves fuel, naturally, and time.  Why would one do any different? Well, there are disadvantages to raw glazing.  The glazes are often very different from other glazes because they need to contain a certain percentage of clay in order for the glaze to 'fit' the pots.  When glazing unfired pots, any unevenness in the pot can create a stress when the water from the glaze is quickly absorbed into the pot.  You can easily imagine that in a thin section the clay becomes saturated (and therefore swells) while in a thicker section it does so much less.  So you can get pots cracking when you glaze them because of this.  Or when you fire them.

Then, there's the glaze recipes themselves.  The best way I can think of to explain this to those who know nothing is to liken a glaze recipe to a cake recipe.

You want to make a cake.  You have in mind a sponge.  You know roughly the proportions of fat, sugar, eggs and flour.  If that were a glaze recipe, though, then this classification by ingredient would be very primitive.  No, what you are required to judge is the correctly proportions (correct, mind you, not rough) of protein, fat, carbohydrate, vitamins, minerals, water and fibre.

So, you find out how much fat there is in an egg.  Add that to the fat in the butter.  7 grams out.  Use a little less butter.  But butter contains a little protein and now you have disrupted the exact amount of protein you need.  Reduce the eggs by one and now you have far too little protein.  Oh well, let's make it into a walnut sponge.  Walnuts have protein in.  Yes, but they also have fat, which you had too much of in the first place.  Somewhere here is a balance of the number of walnuts and eggs and fat and then you can adjust the quantities of sugar and flour so that the proportions are right.  You are probably getting the idea now :)  Anyway, Mike Bailey taught us how to calculate these properties of the glaze using triaxial graphs.  It involved a lot of maths and I found it fascinating and hugely enjoyable.  Now I look at it all and I'm aware of two things - a) I've forgotten a lot of it through disuse because of lack of time, and b) I'm still fascinated with this kind of process.  You'll have gathered from previous posts that lack of time generally wins hereabouts.

Your regular potter, though, doesn't usually bother with all of this.  There are glaze recipe books.  Other people have done the science and then used the glazes and proved their worth, just as in cooking.  If you're no cook, you can buy premixed glaze ingredients where you just add water, just like packs of scone mix or sponge mix.  There's room for all of this in the wonderful world of pottery.

If you're a raw glazer, though, you are a specialist.  There are very few recipe books for raw glazes.  In fact, I don't actually know of any.  You will, though, find glazes in general books which either state that they can be used for raw glazes or look promising because of what you already know you need to include.  You can try these.  Most of them will not work for raw glazing.  Or, you can rely on the generosity of other potters to pass on their recipes.

I use two recipes dictated to us on courses at Ridge Pottery year after year.  The other two glazes I have adapted from one of Douglas' original glazes by playing around with the triaxial graph method, having read around the topic of the sort of colours I was trying to produce.

Only four glazes?  But we've seen many more than four colours on your pots!

Well spotted.  You have indeed.  And that's the alchemy.  Remember all those factors in the firing process.  Well, add that to four glazes combined with two different clays, a couple of coloured slips and some decorating glazes and you get the picture.

I expect you're a bit bored with all this technical stuff now.  Me, I could go on for ages.  Writing about things in this way gets me back in touch with aspects of the work that I sometimes neglect.  I'll spare your feelings, though, and stop here.  You've seen the photo at the top of this post.  You may remember there was a photo of some glazed pots in the previous alchemy post.  Well, they were the same pots.  Just to illustrate that what you see before the pots are fired often bears little resemblance to what they look like afterwards, here are the two pictures together. 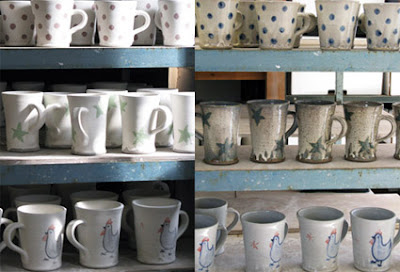 Magic, isn't it?
Posted by Cloth and Clay at 6:04 PM
Labels: information, pottery