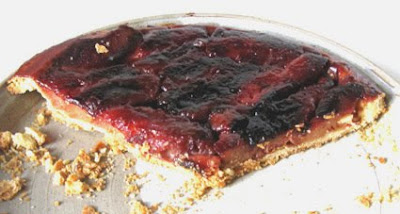 Yesterday I still had four quinces left. What to make? H asked, couldn't you just eat them. You can't, not raw. Quinces are rather unpromising raw - pale and uninteresting skin, white flesh, hard and rather granular. The shape is pleasingly curvacious, granted, but that's about it.

I had found a recipe for quince tarte tatin but I didn't like the sound of it so I decided to use my usual recipe for apple tarte tatin but adapt to quinces. Quinces do take much longer to cook, so there was a degree of experimentation in all this. I worked out that I had to mess with the quince pieces. This is what you absolutely must not do with apples but it was going to be the only way to get them cooked through.

I started on a very large tarte tatin, in an effort to finish the quinces off. (I almost managed this, but have one half left that wouldn't fit.) Once the quinces were cooked and I turned up the heat to caramelise the butter and sugar, I could see the pudding was going to be a success. The quinces were working their magic in turning pink and for good measure were tinting the caramel a lovely dark red as well.

Now I had a successful pudding (well almost) I rather regretted making it for just the two of us. Pastry doesn't keep well for long and although I planned to freeze the leftovers, they would never be the same as the freshly cooked pudding.

Luckily, A & N came to the rescue. They are almost unique among our friends in being able to be flexible and completely spontaneous when it comes to food. They were delighted to be asked round for a meal at the last minute, even when I asked them to buy some bread to go with the lentil soup I would make to eat before the pudding. A good time - and most of the tarte tatin - was had by all.

We were talking about getting a life and A asked me what sort of Life it is that I want to get. I answered relatively briefly, for me, that it's a life that contains not just work.

It's so much more than that, though. At the risk of tempting fate in saying so, I still feel I have kept the life I got when we were in France. Getting a life is really about the sort of things I've been writing about here.

but most of all enjoying.

I do need to work, obviously. I need to earn money and I also need to do the work I do to satisfy my creative impulse. The French Experiment was a success. I made so much stock before we left and shops sold enough in my absence that I still managed to make a living and didn't need to draw on any capital to survive. Now it's time for the English Experiment. This experiment is to get a better quality of life by not rejecting opportunities or desires to do things I love just because I think I haven't time.

It probably won't be easy. Let's face it, most of my goals aren't easy to achieve. I do always get there in the end, though.

Yesterday I swam half a mile. I finished the first textile "canvas". Clay was delivered. I used up the rest of the quinces. I cooked for friends.

Today I'm in the pottery glazing and decorating. I've just enough pots to fill a kiln and then it will be weeks of making again. This will be when the real challenge comes. Putting some flexibility into the rhythm of making tableware will need some dedication, but I am determined to get a life.
Posted by Cloth and Clay at 1:18 PM
Labels: cooking, friends, thinks, work