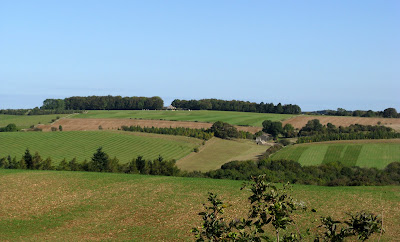 I'm very good at seeing things from someone else's point of view, to the extent that I think I can give the impression of being a little undecided. I suppose it's part of my moral code to be fair. I do try, therefore, to see where decisions have come from and whether they serve the interests of the majority. (For those who like to think of things this way, philosophically, utilitarianism is probably at the foundation of my moral code, though it may not represent the whole picture. That's a topic for another time, though.)

On Friday I went swimming in our local leisure centre. (I went on Monday, too, but I didn't blog about it as one swim didn't seem to make a kept resolution.) I used to go to the Early Bird swimming sessions three times a week but have got out of the habit for years. The last few times I had tried it had resulted in bad bouts of back problems, but during the summer when we swam in the river I began to build up the number of 'circuits' I swam each time without ill effects and I'm hoping to continue regular swimming now we're home.

Two changes caught my attention. The first is that the pool is now divided into lanes. It's not a big pool, 25m long and with only four lanes. One is labelled "fast", one "medium" and the two nearest the steps form one big lane for slowcoaches. I'm a pretty good swimmer and get up a reasonable speed once I'm in the swing of it but I swim breast-stroke so although I tried the fast lane, it was soon clear that since everyone else there was swimming crawl, I was going to be a nuisance. I changed to the medium lane. I then found myself floating about in the water waiting for the person in front to get further forward. It was the fact that I could be seen at the same time as too slow or too fast that made me think about the concept of perspective in the first place.

I was on the point of becoming very grumpy when I noticed that there were one or two swimmers who would occasionally wait in one corner of the lane and let others go in front. A sort of wetiquette, I suppose, it worked well enough that for the last ten lengths of my swim I and several other strong breast-stroke swimmers were able to swim pretty much continuously. I can see why this has been done because previously when it was a bit of a free-for-all it was often difficult to swim continuous lengths because of dodging those who are slower, just want to float or go for the social chit-chat as much as the swimming.

The other change is that there are large notices saying we must not wear shoes in the changing area. If we want to keep our shoes on there are plastic shoe-covers for our use which we may recycle ourselves but must not replace in the dispenser for others to use. Of course there is the option to take our shoes off. Outside the changing room there are some chairs on which we can sit to replace our socks and shoes after swimming.

Now, Stroud District Council, among other bodies, is trying to encourage the businesses and residents of Stroud to stop using polythene bags. Stroud District Council is also in charge of the Leisure Centre and although the actual management is contracted out, I am assured that the council know of this latest scheme. As an occasional market trader I am discouraged from packing my goods in polythene carrier bags. I'm generally in favour but for very large or heavy pots I do supply polythene carriers; they're a tasteful purple (of course) and can be reused for all sorts of things once the pots are safely home. But - at the same time as the council are discouraging me from supplying the plastic bags they are sanctioning a scheme which encourages me to wear single-use plastic shoe covers. I could spurn the shoe covers, of course, but then I am left outside the changing rooms after my swim with damp feet from the wet floors and my towel wrapped round my wet swimming costume, the usual way to take such things home for a swim for as long as I have been swimming. If I want to keep my towel available to dry my feet outside the changing room I shall have to take something to put my wet costume in. What could that be? Ah, I know - a polythene bag.

What's the other perspective on this? Apparently, people had been complaining about the changing rooms being dirty and have given positive feedback about the shoe cover scheme. It seems that we may tread in all sorts of things while outside and then if we go into the changing rooms, these allsorts transfer to the floor where people's children walk with bare feet. Well, yes, I suppose this must be true, but then it must always have been true. That's the point of changing rooms - you go in with your outside kit on and come out in your sports kit and after you've done your sport you reverse the process.

I suggested a very large heavy-duty doormat area outside the changing rooms and the duty manager said she would pass this on. The plastic shoe covers are a trial measure, apparently, but I'm afraid I'm not very optimistic that my lone voice will achieve much against the no-peck-of-dirt lobby. I'm contemplating a letter to the local paper, a thing I've never done before.

This has turned into a bit of a rant. I'll come back to the subject. As well as seeing things from someone else's perspective we also talk about putting things in perspective, usually meaning not making too much of it. Who's got things out of perspective here, I wonder - me with my complaint about using too much plastic or those who are frightened of what might be brought in on our shoes?
Posted by Cloth and Clay at 11:18 AM
Labels: thinks