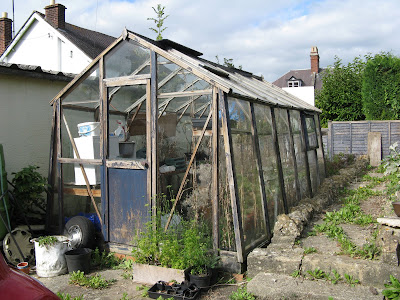 Here is my faithful old greenhouse. It's done 21 years, (although this year nobody has grown anything in it, our house-sitter deciding it was not for her.) M1 (first, late husband, who had same name as present one) had always wanted a wooden greenhouse rather than an aluminium one and had lots of reasons why it would be better, none of which I can remember now. Some time after he died, someone advised me, wrongly, that coloured wood treatments were the same as brown ones but just a different colour, so I painted the whole thing blue, along with all the wooden fences around the garden. After a couple of years it was plain that this stuff was really paint, not good soak-it-in wood preservative, but by then it was too late to remove it and start again. I did get it redone a few times, but eventually the elements began to win and over the last few years bits of the greenhouse have needed shoring up, first with wood and then eventually just with whatever materials we could find to stuff the holes!

Now, a new greenhouse has arrived. 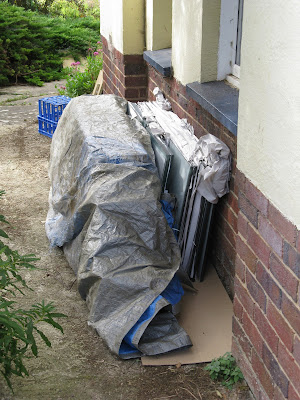 I almost feel this post should be entitled "Can you see what it is, yet? #2" It doesn't look much like anything at the moment, does it? But it will. Oh yes. If a wooden greenhouse can last me 21 years, I reckon an aluminium one can last me 30 years and so I have bought one most likely to be suited to my needs when I am 85!

The weather being as capricious as it is, and M having a woodshed project before he can start on levelling and re-concreting the site for the greenhouse, we can't be certain when this greenhouse will actually be put up, but progress will be charted here, you can be sure. At the moment people are coming to view the old one to see if they want to dismantle, repair and rebuild, after I offered it on what used to be called Freecycle and is now Freegle. Watch this space. Which, of course, is what I hope you're doing anyway.
Posted by Cloth and Clay at 1:14 PM
Labels: garden, greenhouse