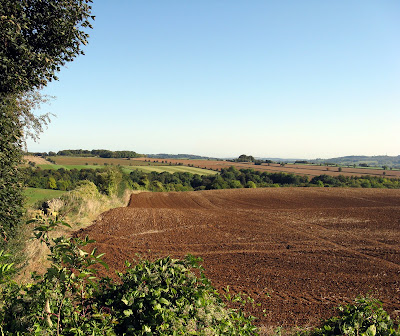 So the clocks have gone back and it is officially autumn but it really doesn't feel like it yet. I think the autumns have been starting later recently as this is not the first time in recent years that I've suddenly realised that I should be well into producing pots for Christmas sales before I've had time to think of the summer as really being over. It is very mild at the moment, of course, and then I have been 'settling in'. Last week I got back into the pottery and found enough pots to glaze and fire that will just top up stocks of, for instance, blue spotty pots before I am able to produce any more.

While the kiln was firing on Sunday, M and I were tackling shrub/tree pruning. He's about to buy a new car and it seemed sensible to do trips to the tip with trailers full of messy garden rubbish with the old car. M was pruning the buddleia by the gate and I was in the front pruning the escallonia. It has got a bit out of hand and some of the branches are now rather thick. Too thick for the lopper, some of them. But one of those needed to go. Rather than interrupt M to come and saw the branch, I decided to have a go anyway.

I used a technique I've used before - rest one handle of the loppers against the upper body and use both hands to pull the other handle towards you. Don't try this at home, folks. The lopper handle holds your ribs nicely in place while your arm pulls the muscle away! Well, not quite away as in detached, but away in direction and pulls certainly. I've had pulled rib muscles before. This one isn't as bad but it is certainly stopping me doing most of the things I would otherwise have been doing at this point in the autumn.

No more garden clearing. More seriously, no making pots. I'm not sure how long this injury will take to mend but the muscle I've pulled is one I'm most aware of using in the pottery. I'm taking arnica and rubbing in arnica gel but other than that I suppose it's a matter of wait and see.

I've got other work and jobs to do, of course. Yesterday I designed the flyers for my Open Day which I can take with me on Sunday when I go over to work in By Local. I have been printing out photos from the last twelve months, some to go in albums but some to make cards with and I can be getting on with those. I shall be getting stressed, though, if I'm held up for much more than a week.
Posted by Cloth and Clay at 8:11 AM
Labels: news, pottery, seasons, work