Thanks, Mum and Dad

Excuse me, will you, while I just play with my New Toy for a while? There's a recipe for plum ice-cream thrown in for free if that helps.

Back in April, M and I got married and Mum and Dad generously gave me - oops! sorry, gave us - a Kenwood Chef. They actually handed it over a few weeks before the event so I could use it when making the celebratory lunch, which I did, but then it was covered over and we left for France and the KC sat here patiently waiting for my return.

I've been thinking about the ways in which it will save me time and was able to use three different functions one after the other when doing things with some plums. There were two jars of plums which didn't seal properly and needed using straight away.

First, I made a big batch of crumble mix.

The flour and fat went into the food processor and within about a minute the thing was done! Used what was needed for today's crumble and froze the rest, ready to take out in whatever quantities are needed. Fruit stewed, crumble crumbled, instant puddings!

Secondly I made a batch of Plum ice-cream. An unspecified quantity of cooked plums (enough to make a good quantity of puree, probably at least 500g when uncooked) liquidised themselves while I got the cream out of the fridge,

300ml each of double and single creams whisked themselves till firm while I found a half-litre ice-cream tub, 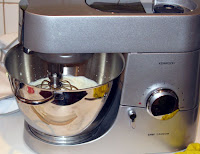 and then puree and cream were blended together very gently in a few seconds.

The mixture goes straight into a half-litre tub and into the freezer. The beauty of this recipe (which is loosely based on one for strawberry ice-cream from the Readers Digest "The Cookery Year") is that it is so rich in cream that it doesn't need beating at intervals once it's in the freezer.

I think the washing up took longer than the making! I shall have to read the instruction manual and see which bits can go into the dishwasher for next time.
Posted by Cloth and Clay at 6:46 PM
Labels: food, news, recipes