The course of true love never did run smooth 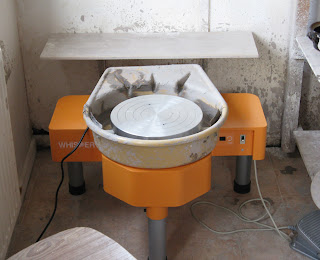 I think I will probably end up in love with my Whisper wheel but it has not been an easy start. If I have more than one problem of the same sort my distress tends to escalate exponentially and so it was with the Gremlins. So when my Whisper wheel didn't, I may possibly have overreacted but I may possibly be forgiven for doing so.

The really stressful aspect of the problem was the completely unknowable timescale of getting to speak to someone about the problem. As I mentioned before, the people at the suppliers had been off sick since before Christmas and were still unable to get up and into work. Eventually, though, they were back at work during the course of the week (although still sounding a bit rough, to be honest) and I was able to speak to people who knew things.

I had been adamant that a brand new wheel when taken out of its original packing should have been left in a perfectly working state and therefore I was insisting on a replacement but Mike at Potters Connection reminded me that they had taken the wheelhead off to drill holes for fixing batts and said perhaps they had not tightened it up quite enough, the 'key' for the wheel being still in its packing at the bottom of the box.  He was most apologetic for this and was willing to travel down from Stoke to Stroud to see to it if I had still not been happy.  However, M and I took it all out of the box again and although I didn't really feel there was any tightening to do, after trying, the clonk had gone.  I was really very glad not to have to make the poor man make the journey when he clearly still wasn't feeling his best.

One very happy and entirely unexpected discovery was that at least one of my splash trays from previous Shimpo wheels was compatible.  This is good because I have small strips of stainless steel bolted to the sides for scraping hands and because I like to swap splash trays when changing clays rather than thoroughly cleaning the tray out.  As you can see in the photo, thorough cleaning of splash trays is not my forte.

So - all well and good?  Well, no, not really.  In case your nerves can't stand it, perhaps I should add that it is all well and good now, but it wasn't immediately.  We put everything back where it was wanted, M moved shelf brackets that were now too low for the new wheel to fit under and I started to work.  The previous day I made the first attempt at throwing for a couple of months and although my rib injury was complaining, I had decided that doing stuff might be the way to full recovery now rather than resting it and not doing stuff, so I was keen to follow up by making the lids to go with the casserole dishes of the previous day.

I could not throw.  I just could not centre the clay.  First, I thought it must be because the wheel is slightly higher and I was working at a different height, but we tried raising the chair on some blocks and it made no difference.  Then I thought perhaps the clay had somehow (though I couldn't think how) become uneven and that was causing the problem.  So I took myself and the clay through to the cold end of the pottery and tried a piece on the old wheel.  Perfectly alright. I was convinced (as was M) there must still be some problem with the wheel.  I phoned a potter friend, who said he thought perhaps it was just that the wheel and I needed to get acquainted and then I phoned Potters Connection who said more or less the same thing.  Give it a few days, they said.  This was not encouraging to someone who could really only do an hour or so a day.

Eventually I saw that I had no option, so I went back in to try again.  And this is where some kind of explanation formed itself.  I studied what was happening and realised that the new wheel is much faster than the old one.  I had been trying to throw as if the wheel was identical.  Additionally, I decided that the foot pedal, although not appearing particularly light of touch, was in fact sensitive in at least a different way, so it was possible that a very slight increase in pressure as I leant forward was changing the speed.  I made the appropriate adjustments and hey presto! of course I can now throw again.

All of this would make me feel rather stupid, you can imagine, were it not for what I think is the explanation.  I've been aware for a long time that I have a very particular connection between mind and body.  In some ways the connection is stronger and clearer than for some people but in others there's just something missing.  For some reason, noticing an 'obvious' increase in speed had not been straightforward for me. I find it difficult, at this point at least, to explain what I mean by this but I am fairly sure that it's not unrelated to other mind/body difficulties.  How many other people do you know, for instance, who feel motion sickness for the first two or three weeks of driving a new car?  It's always happened to me.  I have other peculiar difficulties here and there which add up to some kind of problem between mind and body.  None of them are too severe, but they can, as in this case, require concentration to overcome.

So here we are, my Whisper and I, after almost two years of my wanting to own one and after so many initial difficulties.  I've always thought Shakespeare meant that if there aren't a few problems, it's not true love so I'm beginning to feel very encouraged by overcoming what seemed like rather serious problems.  The Whisper really does whisper.  Gone are the days of having to play CDs at full volume and needing to select music that does not vary in volume.  I can now once again play symphonies and concertos without losing everything except the ff bits under the twangy buzz of the wheel.  I can choose the music, or silence, that most suits my mood.

It already feels different.  Making pots is not just a mechanical thing - one's inner processes always affect the quality of the work.  Over the last two years my predominant inner process while throwing pots has been a rather tense struggle to ignore the horrible buzzy groaning that filled the pottery.  I had thought that a lot of the tension came from the pressure I was putting on myself to make sufficient work but now I remember why I love making this work and I think I had underestimated the effects of the noise.  There is a particular mixture of physical skill, intention of design and spiritual contemplation that leads to making good pots on the wheel.  I think my Whisper and I might be on the way to achieving it.
Posted by Cloth and Clay at 1:50 PM
Labels: pottery, work