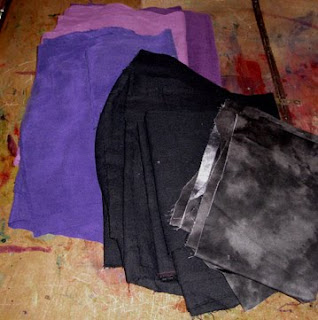 I am making trousers. Before you start wondering how trousers for a large-scale woman can be more economical, would it have been any better if I had called this post "bulk sewing"? No, I thought not. But put all those images aside and you may understand. It's actually much quicker to make several garments concurrently than one after the other.

You get this effect even more if there are two of you working together. In the late seventies and early eighties, when I was first teaching, I used to go and stay with my parents for a week or so during the school holidays. I would take clothes to make and usually my own sewing machine. Mum and I would make two or three garments for each of us in four or five days. One person would be stitching, one pressing and pinning and we would hand things backwards and forwards between us. It was astonishing how quickly the garments came together. As my art work filled more of my time, sparing a week for dressmaking became too difficult and we got out of the habit. I've usually made more than one garment at once since then, though.

I've never had five things on the go, but as I was trying to decide which of the trousers were the most urgent to make, I came to the conclusion that making five was not so daft. (I'd like to point out that I could probably have made ten pairs if I'd used all the trouser material in my possession, but lines have to be drawn somewhere.)

I am a person who takes naturally to economies of scale. Apparently by no means everyone does. Many friends shake their head in puzzlement at the idea that I will happily set to and make a batch of ten servings of some dish or other and freeze eight of them. To me, the idea that if the day has not gone to plan or I am in the middle of some work that takes me well into the evening, I can easily find something in the freezer that just needs heating up is a real plus.

I miscalculated once. I picked as much spinach as was ready, weighed it and then worked out that there was enough for three times the recipe I had in mind. I bought the ingredients. I did feel surprised at the tins of tomatoes but remembered that the recipe title included the phrase "rich tomato sauce" and that this was achieved by lots of cooking down. I started cooking. As I was turning in all the tins of tomatoes, alarm bells began to ring. I looked at the recipe again. "Serves 10." So we had thirty portions of spinach and ricotta in rich tomato sauce. It was good, though. And I'm often surprised and disappointed to find I don't have any in the freezer any more.
Posted by Cloth and Clay at 11:38 AM
Labels: food, sewing