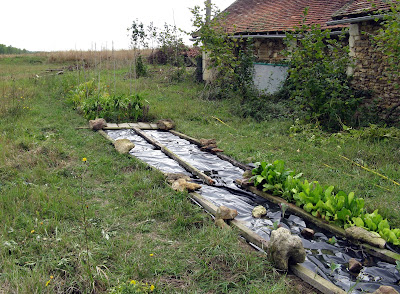 Well, the title got your attention, but I bet you're wondering about how it links to the photo.

This is how my vegetable plot here looks at the moment. As with so many decisions in life, I've been doing a lot of thinking out loud which sounds to M like wavering and changing my mind but really is working through the alternatives. What to do next about the vegetable plot? To begin with, having planned a five-month trip here, I was clear that it would be worth growing some vegetables. Two autumns ago we covered an area of grassland with black plastic. Last autumn a neighbour came and ploughed it for us with the cutest little tractor the size of a ride-on mower and told us to leave it uncovered. This spring he rotovated it. Yes, I know, I know, all you gardeners out there, wincing and exclaiming that rotovating just breaks up the weed roots and distributes them over a wide area. But really, we couldn't have dug it ourselves. Mike usually does my digging for me but when we arrived in April he still had a bad back from wood collecting and the ground would have been impossible for me to break up from its ploughed and over-wintered state. In retrospect, we agreed that our neighbour was wrong and we should have covered it in plastic over last winter as well. You live and learn.

So I began to prepare the plot for use. It certainly wasn't ready after rotovating. The ground was incredibly hard and sometimes the weather was hot so not only was it sweaty work (yes, I'm getting to the point of the title) but there were times when it reduced me to tears as I remembered my easily worked soil in the garden back in UK. The blood? Well, I probably grazed a finger or two, I don't remember, but the details are not important. In essence, blood, sweat and tears are what it took to get the vegetable plot started.

Five months has been a very short time to grow things in and I've been saying for a while that it's probably not going to be possible to do vegetable growing again here as we won't be able to stay for five months. But then, I got to thinking. Having pulled up the bean canes, I noticed there really weren't many weeds. We've had some good rain in the last week and the soil was soft and moist. What a waste of all that effort in the spring to let it just return to the wild.

A couple of hours saw the first bed weeded and covered in black plastic. I'm leaving the perpetual spinach, which hasn't done all that well, to be honest, but perhaps it will pick up over the winter and not have gone to seed by the time we return. I've put in a few cauliflower plants too. This is an experiment. When I've tried growing them before I haven't had a lot of luck, but caulis are so expensive here, I thought it was worth a try.

The far bed still has peppers, tomatoes and marrows that I will be taking back with us. I hope to harvest them and prepare the bed in a similar way to the first before we leave.

I don't really know how effective the plastic will be in preserving the well-worked state of the soil. This time we have a level plot for the plastic and have used wood around the edges to minimise space for the wind to get under, so I'm hoping not too much will tear over the winter. We don't know when we'll be back next year, but are thinking of June, in which case if I can put plants straight in they will actually be no later than they were this year.
Posted by Cloth and Clay at 2:13 PM
Labels: garden, news