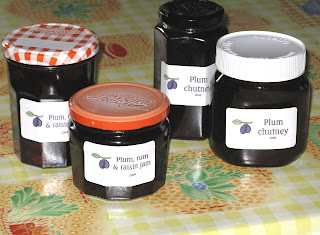 I love to cook and make things like preserves. One of my friends likes to mis-quote "Life's too short to stuff a mushroom" as variations such as "Life's too short to make your own ice-cream" but I notice she's always very happy to eat mine! The trouble is that life certainly is too short to do everything and it's one of my constant conflicts to decide how to spend my time. But that is for another blog.

For about ten years or so I got out of the habit of making jam but since I've been coming to M's house in France, where there is fruit growing on our land and other fruit available locally at lovely cheap prices, I've found the urge to preserve irresistable again. This year has been a glut year for all fruit, including the Victoria plum tree, which in the last five years I've only ever seen produce a couple of dozen fruit before. They are truly delicious. I've bottled, jammed and chutneyed and have now run out of jars again.

One thing I want to use this blog for is occasional foodie features and recipes and the plums get the honour of going first. I would have liked my first foodie photo to show the glow of colour you get from sun on a jar of jam but we are in the middle of a cold, wet spell so you'll have to make do with the kitchen tablecloth.

The recipes assume some experience, e.g. in knowing when jam has reached the right temperature, how to sterilise jars, etc. They're also in imperial weights, for the time being at least. Until recently I didn't have kitchen scales that could competently weigh in metric and many of the recipes I use or create are based on traditional ones where the measurements were all in imperial anyway. There is a useful conversion site here if you need it.

Plum, rum and raisin conserve
I've combined several other recipes to come up with this. The first tasting (on buttered scones) was delicious!

1. Quarter and stone the plums. Place in a preserving pan with all the other fruit. Cook on a low heat for at least an hour until the plums are all soft and the raisins have begun to plump up. Stir occasionally.

2. Add the sugar and stir while it dissolves. Turn the heat up a little and bring to the boil. Cook till setting temperature is reached, stirring frequently as the jam has a tendency to stick.

3. Remove from the heat, wait for the jam to stop bubbling, then stir in the rum. Pour into sterilised jars and seal.

1. Put all the ingredients in a large pan and cook over a low heat, stirring until the sugar dissolves.

2. Bring to the boil and simmer, uncovered, over a low heat for about three and a half hours until the mixture is thick and pulpy. There should be hardly any liquid left.

3. Ladle into sterilised jars and seal.

4. Store for at least a month to mature.

The original recipe suggested that the chutney should be eaten within six months but I plan to ask it to last a lot longer than that. It has sugar and vinegar and isn't all that different from tomato chutney recipes which I've known to last well for several years.
Posted by Cloth and Clay at 10:31 AM
Labels: cooking, recipes