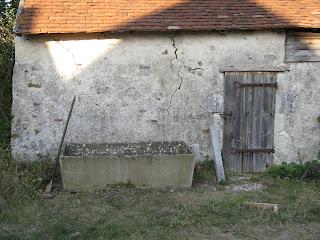 I am so pleased with this trough. On Sunday evening we visited friends who have a farm and I pointed out to Mike that they had some splendid concrete troughs outside the door in which they were growing herbs. These two troughs were probably about 6ft x 18 x 2ft deep. He said there was a slightly bigger one lurking under some brambles somewhere at home. Over lunch on Monday I said that such a trough would be ideal for growing mint if only we had it in the right position. By suppertime, hey presto, there it was. It will need a substantial amount of stone at the bottom and then a substantial amount of soil on the top and this is very likely a project for next year, but the arrival of this trough was certainly one of this week's peaks.

What pleased me as much as anything else was having a partner who could not only get the thing there almost single handed (with the aid of a car and chain and then some runners and a crowbar and a lot of effort) but also had the capability and the interest to go and do the maths to work out its weight. About half a ton, if you're interested.
Posted by Cloth and Clay at 8:10 AM
Labels: news