More than you could ever want to know about chiggers 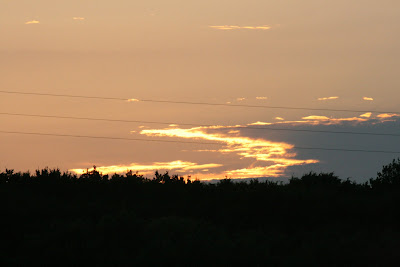 More than you could ever want to know about chiggers is to be found here but I can tell you enough from personal experience.

Since I've been coming down to France, I've been certain that there were insects in the grass that were biting me. M, who is not attractive to mosquitoes, was not experiencing the same problems and, to be honest, I never thought he was quite sympathetic enough when I complained. He also couldn't think of anything it could be. I was certain, though, that particularly towards the end of the summer, I suffered more from bites on the feet and ankles if I had been walking in the grass for any length of time.

A few weeks ago I sustained some new bites behind the knees and around my waist and felt certain that something had been trapped there, so I did a bit of research. Chiggers. They live in grassland. They jump on, travel up your trouser legs or down your shirt front until they find some nice soft skin or are stopped in their tracks by your clothing or a bent limb, and then do their irritating work. I leave it to your imagination all the varieties of places this can be. Anywhere you can think of, I've probably been bitten.

I'm not getting allergic reactions to them as I do from mosquito bites but they can be pretty aggravating. There doesn't seem to be a lot you can do to stop them, especially as they are too small to be seen by the naked eye. You can put things on to soothe the bites, though as with everything, it's never perfect.

Today I am enjoying a little bit of schadenfreude, though. Friday's excellent gardening brought a big batch of bites. But because M has been helping me prepare the vegetable plot for the winter, he too was kneeling on the ground and therefore made himself available to the chiggers. And they're not so discerning as mosquitoes, apparently. He has bites, though not as many as I do. Today he admitted that he has enough of them to make him realise what I must be feeling with the larger number that I have and he is now able to feel more sympathetic.

So there's a silver lining to this latest batch of chigger bites, which is that at last I feel vindicated in my complaints and assertions about things in the grass that bite.

The photo? The nearest I could get to a cloud with a silver lining. Before you complain about the corniness of that, consider for a moment whether you would really have wanted to see a picture of chigger bites. No? I thought not.
Posted by Cloth and Clay at 4:54 PM
Labels: garden, news, wildlife