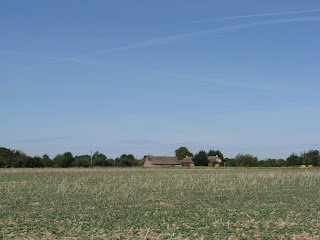 According to Wikipedia, "Documented early use" of the phrase "Get a life!" starts in 1983. When I read that, I thought "how could 1983 be described as early use? It was just a few years ago. Then I worked out that it was more than 25 years ago and started to think what I was doing back then. In 1983 I was single, still teaching at my first school, had not yet done my first piece of embroidery and did not consider myself to be an artist. Thinking of those and other things I was doing at the time, it sometimes seems like a different life led by a different person. I can only think of three people who knew me then who might possibly be reading this blog.

What were you doing back then? (I suppose there may even be some people reading this that were not even born!)

I digress. I tend to. It seems an interesting enough digression to leave in, though.

Telling someone to get a life started out as a rather abrasive comment, somewhat rude and judgemental. Over the last few years though, the concept of getting a life has mellowed so that now it's something we can use reflexively. "I should get a life" is a good way to own up good-humouredly if we are being a bit obsessive about something. More recently still, getting a life has come to mean working less. It's something I've talked about increasingly over the past few years. In particular, the last eighteen months before we came over to France at the end of April this year were particularly over-full of work. I needed to make sure there was enough pottery stock for various outlets for the duration of our stay abroad plus a couple of months after we get back while I get back into production. I met my goal and this did produce a huge high, as it always does. It meant that having come down here I haven't had to worry about the pottery. It has allowed me to spend some of my working time exploring new ideas and directions for my textiles work and to some extent to re-evaluate the direction of my work as an artist as a whole.

I've also been getting a life. I've rediscovered lots of things I used to do and begun some new things. My days have space for things that aren't work and I don't want to give that up.
Posted by Cloth and Clay at 5:02 PM
Labels: thinks, work